On a farm near Middleburg in 1876 Pleun, the eldest of ten children, was born to pioneers, Jan and Driesje (Sneller) De Zeeuw.

After a delayed courtship of eighteen years he married Lillian Van PUtten, daughter of pioneers, Gerrit William and Evertje Van Putten. Their was wedding was solemnized under the Apple Trees in 1916. Pleun then brought his bride to a farm in Plato Twp. Lillian was a talented seamstress. To this union was born six daughters. Plato #7 school and one special teacher, Anna Eppink, taught each of the daughters.

Special memories were walking to school and picking wildflowers in the unbroken prairie; the great flood that stranded girls in school, parents in Sioux Center and twin baby sisters at home with sitter, Winnie Lammers; the drought of the 30's bringing grasshoppers, terrifying dust storms and leaving the farm to live in Sioux Center in 1936.

Each daughter married to a farmer in close proximity in Sioux County and each daughter presented their parents with three grandsons, a total of eighteen, before a granddaughter was born to Gertrude.

After graduation from High School Edith, the firstborn, worked for many years for Pete Rons in the little Southside Grocery store for the huge wages of $3.00 a week. She married Herman Sietstra and farmed near Boyden, Iowa. They have six children: John, Philip and Larry (twins), Karla, Cheryl and Dale.

Gertrude was a school teacher before marrying Adrian Punt. They moved to the Case Punt homeplace near Middleburg. Later Adrian served as manager of the Memorial Funeral Home until retirement. They have four children: Curtis, Leslie, Paul and Joan.

Joan decided not to be a teacher but chose business education instead. She served many years as Secretary. She married Andrew Ennema (name changed to Brenneman in 1964 because of embarrassment to children in a changing culture.) They have four sons: Howard, Arlin, Wendell and Carl.

Freda served many fellow Sioux Countians as a waitress in local establishments. She married Peter G. Mouw and they too farmed East of Sioux Center. Four of their children died in infancy: David, Laura, Kallen and Thomas. Surviving children are: Berend, Jeffrey, Lynne, Steven and Kallen.

We grew up with cob and coal heaters, kerosene light, hand-turned washing machines, horses and horse drawn machinery, Model T's and outdoor privies. We were privileged to witness the development of electricity, furnaces, electric appliances, putting a man on the moon, space flights - truly a century of change! But our dearest heritage was the love of God held dear to our parents and passed on the their children. The First Reformed Church of Sioux Center was the catalyst for all of our lives. It began with many years of commitment by our father as Elder, Deacon and teacher. The services were a priority in our growing years and for this we give our parents heartfelt thanks. This had molded our lives and we have passed this to our children; trusting that they too will pass it on to the next generation. To God be the glory! 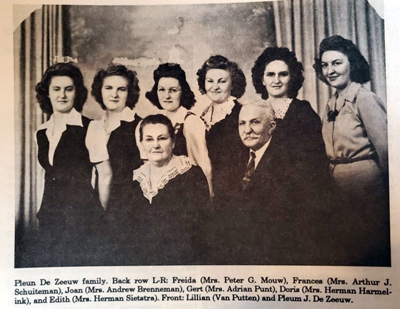