Ben B. Mouw was born January 24, 1891, to Berent Mouw and Mary (Duistermars) Mouw while living on a farm west of Sioux Center, Iowa. Ben was the ninth of eleven children, seven sons and four daughters. The farmstead still stands with people living in the original home, almost 100 years old.

Henrietta Ramaker was born September 30, 1892, to Steven and Lena (Dekker) Ramaker. She was born in a sod house in Prairie View, Kansas, and was called Hattie. She was the third of nine children, three daughters and six sons. Even before her teen years, she worked outside of her home, doing both household and outside chores for one dollar a week. Her parents and family moved to Iowa in 1911. She and Ben were married March 6, 1913. They moved to a farm one mile and a half from Ben's birthplace. Nine healthy children were born there and they remained there until moving to Sioux Center in 1951.

Now their names have changed to Pa and Ma within the family unit, through the third generation after them. The children, named according to age, respectively are: Madeline, Steven (deceased), Berniece, Lawrence, Harold, Calvin, Peter G., Faye and Orvin. Remembering when I was very small, Pa would get up from bed first in the morning to light the stove. Ma would remain in bed a bit longer to nurse the baby and put him back to sleep. We, the older ones, sleeping in the same bedroom, would slip out of bed to watch Pa grind enough coffee beans to make a large pot of coffee on top of the stove. It had to come just to a boil and then rest a bit to settle the grounds. After vigorously beating two raw eggs with quite a bit of fresh cream and some sugar in a large cup, he would keep beating slowly pouring the hot coffee over the mixture. We could hardly wait. We sat on his lap to share, after he would pour it into a saucer bit by bit and feed it to us. Our childhood days will be remembered as learning how to work at a very tender age. When not in school and even after school hours, we were doing home work not the kind you sat down with unless it was the milk stool. Highlights were: spending five cents at Te Veltrup's penny candy and grocery store after Catechism on Saturday afternoon; receiving twenty-five cents on the 4th of July to spend at the church's Mission Fest in Perkins Grove near Hull, Iowa; making ice cream and saucijzebroodjes on Saturday evening with company to share; our country school Christmas programs and parties, with a treat from our teacher and hot chocolate and goodies for lunch which parents brought; our Sunday School programs and a sack of candy and nuts. Our exciting Christmas Even when we were allowed to set our shoes next to the base burner to surprise us the next morning with the largest apple and orange our dear mother could buy. Oranges, of course, were gold nuggets and store bought apples a far cry from last fall's catalogue paper wrapped kind. Trips to State Park (Oak Grove now) on Decoration (Memorial) Day with uncles, aunts and cousins' families inevitably meant an overhaul of one of the cars before we could leave. This gave our busy Mom a little more time to fry the chickens they caught before daylight, and to bake the pies for our noon picnic. Swimming was wading ankle deep in the Rock River with all clothing intact except our shoes. On Thanksgiving there was morning church, then a duck, goose, pheasant or rabbit dinner, or including all four, with stuffing and all the trimmings, all home raised of course. After the meal the men and boys went hunting while the women heated water and cleaned up the aftermath. Christmas Day also began with morning church, followed by a delicious meal. In our early years, there was no exchange of gifts. Later we each received a necessary item of clothing.

Pa and Ma sought every opportunity to pursue our musical interests by encouraging much singing around the piano. During our pre-teen years, and after, several of us older ones learned to play violin, guitar, banjo and mandolin with Ma at the piano and Pa on the violin. We played in church programs and for groups before marriage. Later, Ma's beautiful contralto voice blended perfectly with Pa's high tenor and they sang duets. Pa's pursuit of his musical talent began at a very early age. It began with a "penny bank" which netted him enough to buy his favorite thing, a violin, at age 14. He spent many hours of practice in a dark room until late at night when his mother would send him off to bed.

As our family increased, so did our needs. Pa raised, trained, bought, sold and traded horses and dogs as a part of farming. A better deal was always a plus for keeping a family fed and clothed.

The great Depression of the 30's struck hard. Ration stamps for many food items, gasoline, and other things caused shortages, but, on the farm we raised most of our food. When forced to buy clothing, only bare necessities were purchased. Right on the Depressions' heels we were struck with a scorching hot, dry summer, that caused a total crop loss. All winter paralyzing snowstorms and cold weather caused severe fuel shortages and costs. Regardless of our struggles, we were taught the true meaning of "counting our blessings." Our devoted mother's steadfast love and family concern was constantly shown in the unending tasks she performed. Her ability to make something out of almost nothing was incredible. She took in and fed the underprivileged: tramps, beggars, hired men and crews of farm laborers. Our home was always open to adult and married nieces and nephews who came frequently. In spite of our close quarters, cousins and overnight friends, shared our home.

All of the nine children attended the same rural school one and three-fourths mile from home. Several of us had the same teacher, Miss Sarah Riemersma, all eight years. Our only mode of transportation was by pony cart in summer and horse and covered cab in winter. Pa rode along beside us on horseback when traveling conditions looked dangerous. He also placed a small horse barn on the school ground. Later during high school days, we still used horses, either buggy or horseback. Due to extremely poor roads when muddy and snow bound, our family was the very last to abandon horses as a mode of travel. As teenagers, it became an embarrassment to be the only ones traveling like this, but, our enthusiasm for singing with groups, playing the organ and piano and young people's meeting, was what governed our priorities. During these same years, we also became more concerned about appearances in and around the house. When Grandpa and Grandma Ramaker came to visit for a week, we would lock up the ducks, geese and the goats and then proceed to sweep around the house and scrub the one sidewalk we owned. There was not, a blade of grass anywhere. The goats gloated over any automobile that drove on the yard and would then proceed to jump on them for their aerobics.

During 1941, World War II reared its ugly head. Steven, Lawrence and Harold entered the service in 1941, 1942 and 1943. All of them being involved in active duty on land or sea caused untold anxiety for Ma and Pa and the rest of us for five years. Our praise and prayers rose to our God in gratitude and thanksgiving for bringing them home alive. Also for comfort to those left without hope for the return of their loved ones. Later, the Korean War struck another blow, and Orvin, the youngest family member was drafted. The same war took Christopher Claye, an Indian youth who had lived with our family from five years of age until his military summons. Not many years later, his tragic death near the Winnebago reservation brought more grief.

After the war, Pa and Ma were trying hard to relocate their returning sons who were now ready to leave home with no place to go. Pa and Ma rather reluctantly moved into Sioux Center to make room for adjustments. For a number of years, Pa visited his sons on the farm. At the same time, he travelled through the country buying and selling empty sacks of every sort. Still later he occupied himself in his own basement wood crafting shop. Pa's love for horses and animals rubbed off on several of his sons, two of whom became veterinarians and several who raised, trained and raced horses. Two of the daughters became rural school teachers. The other was a nurse aide for many years. As our families grew, all but one of us remained in close vicinity of Sioux Center. We shared birthdays, holidays and other special events as a family.

From 1938 until 1953, Pa and Ma's children either changed their names, or added a personage to their own, all in the process of marriage. They became Madeline and Gerrit Gesink; Steven and Virginia (Jude) Mouw, both deceased; Berniece and Ed H. Rozeboom; Lawrence and Dorothy (Lammers) Mouw; Harold and Marge (Dahl) Mouw; Calvin and Wilma (Huitink) Mouw; Peter G. and Freda (De Zeeuw) Mouw and Orvin and Ernestine (McCrary) Mouw.

Pa and Ma were blessed with thirty-eight grandchildren and sixty-nine great grandchildren before both of them died. In this generation, as those before them, a love of humanity, animals and music persists, as is evidenced by the large number of them in medical professions and musical opportunities.

In her later years of declining health, our dear mother regressed from a cane to crutches to a wheelchair. Out father devotedly cared for her for several years in their home until her condition and mental impairment required nursing home care from 1971 until her death in 1974. Pa joined her there a few month later and fed her until her dying day on June 3, 1974. She was 81. After her death, he again became involved with his wood crafting, singing as usual, all the while. He also spent much time practicing and playing his beloved fiddle with Madeline's accompaniment on the piano. He died within twenty hours after singing God's praises during Sunday morning worship service in the Nursing Wing Chapel. He was 94 years, 8 months, 20 days.

As living children, we have the freedom to choose the things we would do differently. Yet, what a legacy Pa and Ma Mouw have left for their children and those who choose to remember it. Thanks be to God! 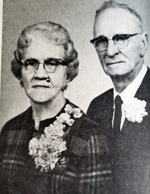