John Addink was born on May 20, 1886 on a farm 2 1/4 miles east of Sioux Center. He was the youngest child of Hendrik Willem Addink and Gertje Ketelary. He was born of Dutch ancestry and had four brothers and one sister. Two of his brothers, Herman and Henry were also Sioux Center residents. Another brother, Bill, died in Sioux Center at age 24.

Jennie Lammers was born on January 7, 1889 1 1/2 miles west of Sioux Center. She also was from Dutch ancestry. Her father was Dirk Lammers and mother's name was Wilhemina Nykamp. Unti she married, Jennie lived at the same farmplace. She, along with her twin brother John, was the oldest in a family of ten. She had five brothers and four sisters. All of the children lived in Sioux County their entire lifetime. Ralph Lammers still lives near Sioux Center. A sister, Mrs. Louis (Johanna) Klein, resides in Sioux Center.

When John was at the young age of five, his mother died. At age eleven, he also lost his father. In order to have his immediate needs provided for, he made his home with Manus Wissink as a hired hand.

Throughout the years, prior to this marriage, he accepted a variety of jobs. One was "working a land claim" in North Dakota for Howard Jelgerhuis. In winter months, when no work was available, he made his home at the resident of Mr. and Mrs. Dirk Lammers. One of their daughters, Jennie, later because his bride on February 3, 1910.

Jennie's life, prior to her marriage, was characterized by hard work in the house and in the field. She followed her mother's footsteps. Jennie loved to tell about how her mother had been helped by Jesse James. Struggling with a broken harness tug, while plowing, she gladly accepted an offer of help from a horseback rider and his companion. Later the strangers were identified as Jesse James and his gang.

After John and Jennie were married they spent the greater part of their life farming. They first located on a farm near Doon. The rest of their several moves were to farm in the vicinity of Sioux Center. Their last farm move was to a forty acre farm two miles south and two and one-fourths west of Sioux Center that they had purchased.

To supplement his income, John ran a corn shelling business for farmers. Later his son Dick learned the trade and took over. John had then become involved in commercially buying and selling all kinds of fowl, especially chickens. It also involved culling and worming them. His son Henry worked with him unit he enlisted in the navy. JOhn also provided a hog worming service for farmers.

And what did Jennie do when John was busy with his vocations? She provided for the needs of her family, of course. But as duties were slowly on being taken over by her daughters, Jennie spent more and more of her time giving tender loving care to her chickens. By now three chicken coops dotted the premises and they housed hundreds of chickens.

One day her son, Henry, arrived in the house before his mother. He was accused by his father of shirking his duties in the hen house. His reply was that his mother had lagged behind to talk and sing to the chickens. His sisters were quick to verify this.

In January until May of each year, Jennie transformed her living room into a hatchery. The furniture was removed and the carpet rolled up. Five incubators were set up to "decorate" the room. Three hatches of 1,300 chickens each, found their way to other farmers and to the coops on the yard.

On February 13, 1950 things changed. Daughter Gertrude, who had continued to work for them many years of her adult life, became the bride of John R. DeGroot. The newly married couple lived and farmed with them for the next five years. The verbal agreement included Jennie's right to continue to feed the chickens.

In the spring of 1955 the time came for them to become "city folks". They moved to 334 Second Avenue NE. They lived there together for eleven years. John died on November 10, 1966. Jennie continued to live in that home until 1983. At the age of 94 she agreed to live with a grandson, Kenneth Addink and his family, in Sioux Center. She lived with them for a year. She was confined to a wheelchair due to arthritis. The last eight months of her life were spent with another grandson, John Addink and his family in rural Sioux Center. She died at the age of 96, mentally alert and never having spent a day in the hospital!

Both John and Jennie are buried in Memory Gardens. 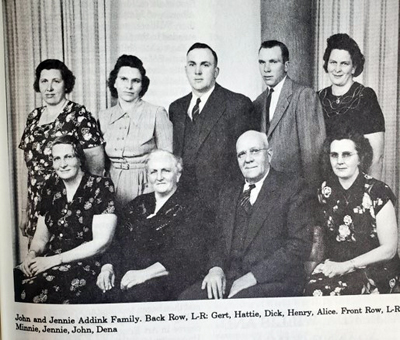