A Memorial Service will be 2:00 P.M. Friday, January 29, 2021 at the Rush Family Chapel, Onawa, Iowa with Pastor Michael Lewis officiating. Social distancing measures must be followed, Due to Covid-19 restrictions- (Masks are required for the visitation and service.) Visitation will be one hour prior to the service at the Rush Family Chapel, Onawa, Iowa. Burial will follow in Grant Township Cemetery, rural Ticonic, Iowa. Military Honors will be provided by the United States Navy and the Grimsley Thayer American Legion Post #502 of Castana, Iowa. Arrangements are under the direction of Rush Family Care Service, Onawa, Iowa.

He enlisted in the United States Navy in 1964 at the age of 17 years old with his best friend, Norm Maynard. Coke entered the Navy on October 30, 1964 during Vietnam and was transferred from active duty to Naval Reserve on October 11, 1968. He was honorably discharged and received the Vietnam Service Medal, the National Defense Service Medal, and the Vietnam Campaign Medal. His reserve obligation ended on October 29, 1970. It was during his time with the Navy that he completed electrician school.

Coke worked many jobs as a journeyman electrician, in the lower 48 states until he moved to Alaska. He worked for ARCO (Atlantic Richfield Company), was later bought and known as British Petroleum, as an electrician on the pipeline.

In 1988 Michael Coke came home from Alaska to attend a family reunion-4th of July party where he met the love of his life Colleen. Michael and Colleen were united into marriage December 9, 1988 in Palmer, Alaska. They lived in Wasilla, Alaska until 1993.

Michael and Colleen found an acreage near Mapleton, Iowa and moved to be closer to family and friends. He continued to commute to Alaska until his retirement in 2000. Coke returned to work and was currently employed as an electrician at Winna Vegas Casino, Sloan, Iowa.

Coke enjoyed golfing, darts, camping, bowling, jeopardy, wheel of fortune, and doing crosswords in the newspaper. You could find Coke enjoying a cold one with friends and family at a local bar, Norms shop, or his own shop. If the shop doors were open you would find Coke singing along to the radio (right or wrong lyrics) and anyone was welcome to stop.

He was preceded in death by his parents, Gordon Milford and Delia Mae (Parkhill) Lane; and one sister, Roxann Ohlmeier. 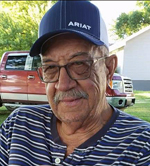