The Armstrong - Van Houten Funeral Home of Mapleton, Iowa is in charge of the funeral arrangements.

Nora was born on June 21, 1932, in Mapleton, Iowa, to Michael & Elizabeth (Zeiman) Schoenherr. She was a lifelong resident of the Mapleton, Ute and Charter Oak communities. Nora married Joseph P. Flanigan on September 17, 1955, in the St. Marys Catholic Church of Mapleton.

She was a member of St. Marys Catholic Church of Mapleton and attended St. Marys Catholic School, Ute Public School & Barnes School of Cosmetology. Nora and her sister, Stella Dietz, operated a beauty shop in Charter Oak for many years. She worked at Tierney Drug, North Western Bell Telephone Company, and part time at Donnas Beauty Shop and Mapleton Livestock. Nora was the bookkeeper at Flanigan Brothers Grain Elevator from 1973 until she retired in 1996. She was a member and past president of the St. Marys Ladies Guild and co-chair of the St. Marys Centennial.

In her retirement, Nora enjoyed watching her grandchildren play sports, being in the Red Hatters, and playing cards and BINGO with her friends at the American Legion Hall. 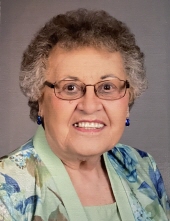