Patsy Jo Hogancamp, 80, of Sioux City, passed away Monday, Nov. 2, 2020, at her residence. Services will be 2 p.m. Thursday at Meyer Brothers Colonial Chapel. Graveside services will be 1 p.m. Friday in Onawa Cemetery, Onawa, Iowa. Visitation will be one hour prior to the service on Thursday at the funeral home. The family strongly encourages everyone to wear a mask at the funeral home.

Patsy Jo, the daughter of Carlo and Vineta (Davis) Nielsen, was born on Dec. 7, 1939, in Onawa. Patsy grew up and attended school in Onawa. She graduated from Onawa High School then attended Morningside College.

On June 25, 1960, Patsy was united in marriage to Al Hogancamp in Onawa. This union was blessed with two children. The family made their home in Sioux City. Patsy worked as a secretary for Drs. Fryer, Rizk and Craig for several years. She then worked in the office for Dr. Hartje until she retired.

She was preceded in death by her parents; husband, Al in March 2009; one son, Kevin Hogancamp; and one brother, Eugene (Donna) Nielsen. 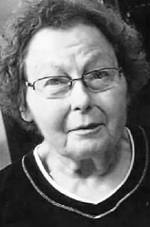