A Celebration of Life service will be 10:30 A.M. Thursday, December 31, 2020 at the Rush Family Chapel in Onawa, Iowa with Evangelist Dale Wolf officiating. (Social distancing measures must be followed-Due to Covid- 19 restrictions- Masks are required.) Burial will be in the Onawa Cemetery, Onawa, Iowa. Arrangements are under the direction of Rush Family Care Service, Onawa, Iowa.

Dorothy was born on April 22, 1927, in Onawa, the daughter of Wayne Eugene and Ellen Johnson Samson. She was raised in Onawa and was a 1945 graduate of Onawa High School. She furthered her education at a business school in Sioux City.

On June 6, 1948, she was united in marriage to Joseph E. Jackson, at the Onawa First Christian Church. The couple continued to make their home in Onawa where she enjoyed taking care of their home while raising their daughter, Laura Jane. Dorothy moved to Windsor Manor in Grinnell in 2018.

Dorothy was an active member of the Onawa First Christian Church. She held a strong faith and a passion for quilting, enjoyed playing bridge, and was a wonderful cook.

She was preceded in death by her parents; her husband, Joseph; her daughter, Laura Jane Stanislav; and a brother, Donald Samson.

Memorial contributions may be directed to the Onawa First Christian Church. 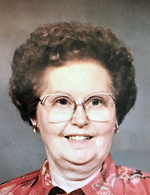