Dorothy Skow-Cosh (Bailey) of Ticonic, Iowa, passed away on November 26, 2020 at Pleasant View Care Center in Whiting, IA at the age of 92 from natural causes. She was born June 10, 1928, daughter of Inez (Murphy) and Raymond Bailey.

There will be a private service at the Rush Family Chapel in Onawa, Iowa with Darren C.E. Goslar officiating. Arrangements are under the direction of Rush Family Care Service, Onawa, Iowa.

Dorothy graduated from Hornick high school in 1946. She attended teachers college in Wayne, Ne and taught at the Castana School. On December 13, 1947, she married Glen R. Skow. They lived in the Ticonic area all their married life. They had three children: Carol Luber (deceased 2018), husband Wayne Luber of So. Sioux City, NE; Joe (Sue) of Florida; Marilyn (Steve) of Ticonic; along with seven grandchildren: Chad (Tricia) Luber, Angie Cobb, Nate (Stacy) Skow, Jessica (Brian) Naber, Kara (Kris) Hurlbert, Kyle (Dana) Longlee, Katie (Trent) Boyle; and 14 great- grandchildren. Glen died October 16, 2001 and she later married Alan Cosh on September 3, 2005 who took wonderful care of her over the last few years when her health and eyesight were failing.

Dorothy was a lifelong member of the Ticonic UMC for over 70 years. She was employed at the Castana Elementary school for 20 years and a hospice volunteer for Burgess Hospice. She and Glen wintered in Arizona for 26 years and later she and Alan also wintered there. She will be remembered by her many paintings, cinnamon rolls and wonderful cooking/baking. And dont forget her potato salad!

She is survived by her husband, Alan, of Onawa; her children, Joe and Marilyn; son-in-law, Wayne Luber; sister, Betty Johnson of Onawa; sister, Bonnie (Fred) of Arizona; grandchildren; great-grandchildren; and step children, Darlene Cosh, Bill Cosh and John Cosh of Wisconsin; and many nieces and nephews; neighbors and friends.

She was preceded in death by her parents, Inez and Raymond Bailey; her in-laws, Margaret and Elmer Skow; her husband, Glen; her daughter, Carol; and infant grandson; brother, Robert Bailey; brother-in-law, John Skow, sister-in-law, Carrie Johnston; and brother-in-law, James Johnson.

Thanks to the wonderful staff at Pleasant View Care Center for their care. 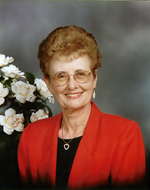