Mahlon S. Pekarek, 80, of Blencoe, passed away Saturday, Feb. 15, 2020, at a Sioux City hospital, with his loving wife, Audrey, Fran Tramp, and the Rev. Patrick O'Kane at his side.

Memorial services will be 10:30 a.m. Thursday at St. Bernard's Catholic Church in Blencoe, with the Rev. Patrick O'Kane officiating. Private family burial with be prior to the service in Graceland Cemetery, Blencoe. Military rites will be provided by the American Legion Stevens Kelley Post 665 of Blencoe. Visitation will be 6 to 8 p.m. Wednesday, with a Scriptural wake service at 7 p.m., at the church. Arrangements are under the direction of Rush Family Care Service in Onawa, Iowa.

Mahlon Stanley was born on March 11, 1939, on a farm near Blencoe, the son of Ignac Andrew and Gertrude E. (Stanislav) Pekarek. He graduated from Blencoe High School in 1957. He joined the National Guard in Mapleton, Iowa, in 1961. He served with the U.S. Army until 1968.

Mahlon and Audrey Ann Lafrentz were united in marriage on July 2, 1966, at St. Bernard's Church. He was a lifelong farmer in the Blencoe area and loved John Deere tractors. He also loved garden flowers, nature, and going for a ride through the country.

He was preceded in death by his parents; father and mother-in-law, Harvey and Ethel Lafrentz; brother-in-law, Delbert Lafrentz; and nephew, Troy Lafrentz.

Memorials may be directed to Burgess Health Center Home Health/Hospice and the Blencoe Volunteer Fire Department. 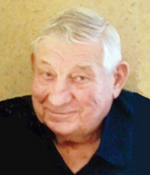