Memorial services will be 11 a.m. on April 18 at Roper and Sons Chapel, 4300 O St., in Lincoln, Neb. Condolences online at Roperandsons.com.

Kay grew up in Lincoln and graduated from Southeast High in 1962. Kay formed many lasting relationship during her high school years, and stayed close to many classmates until her passing.

Kay married Jim Swoboda after graduation and from this union she had sons, Bill and David. Later in life, Kay married Randy Haveman of Avoca Neb. Kay and Randy soon moved to Whiting, where they made their home. In 2012, after Randy's death, Kay was diagnosed with dementia. Having Kay in Iowa and her sister in Kansas City, given her diagnosis, led to a move to Kansas City. She lived with her sisters, Nancy and Trish, for five years and then to a Memory Care Facility until her death.

Kay loved her life in Iowa and she enjoyed cooking, knitting, and making friends everywhere she went.

She was preceded in death by her son, David Swoboda; her husband, Randy Haveman; her parents, Gale and Betty Booth; and her in-laws, LeRoy and Joan Haveman.

We would like to thank her many loving caregivers and staff at Stonecrest of Burlington Creek. 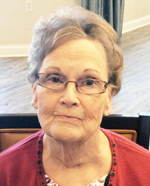