As the only son of David and Sarah Kimball on their farm near Wentworth, [Mitchell county,] Iowa, Curtis N. Kimball might have been expected to carry on their place, but his interests lay elsewhere and his parents saw that he was well educated locally and at the Decorah Institute for the life in business he sought.

In 1879, at the age of 17, he left the farm for Chicago where he attended an evening course in accounting at the Bryant-Stratton Business College and began learning factory management and distribution of products first hand in his uncle W. W. Kimball's company. W. W. and his wife Eva had no children of their own and Curtis had been a favorite of his uncle's from an early age. Young Curtis learned the business in the Chicago office as as a top salesman of pianos on the road in Iowa, Minnesota, North and South Dakota. As he traveled, he visited his sister Isabel, who was teaching at the Moorhead, Minnesota State Teacher's College.

There he met her boarding house roommate, Fannie C. B. Hadley, of Chicopee Falls, Massachusetts, also on the staff at Moorhead, teaching elocution and dramatic art. Fannie and Curtis got on well together and on November 3, 1894, they were married.

Curtis rose quickly in the Kimball Co. He was made treasurer in 1885, and vice president in 1898. His uncle W. W. Kimball died on December 16, 1904, and Curtis was named executor of his will. In 1905, he became the company's second president, an office he held for 31 years, spanning the transitional period from 19th to 20th century practices in manufacturing and selling, Known as conservative, careful, and sure in his business methods, it was noted during the Great Depression that the Kimball building in 1918 under his administration, was the only building Chicago's loop that had never been encumbered with a mortgage.

Two years after his election to the presidential office, Curtis, Fannie, and their children moved from the southside Chicago home to Ridgewood, their 40 acre estate in the fashionable North Shore suburb of Highland Park. Their three-story brick mansion included a pipe organ, installed as a memorial to W. W. Kimball, and the spacious grounds provided an outlet for Curtis' horticultural interests as well as settings for sculptural works by his sister Isabel.

Fifty-seven years of association with the Kimball Company ended with Curtis' death on July 30, 1936, in Presbyterian Hospital, Chicago, of complications following an operation. His funeral was held at Ridgewood followed by burial in Garden of Memories Cemetery in North Chicago.

During his life he had enjoyed attending concerts and opera, acquiring rare books and paintings, and was a member of the Highland Park Presbyterian Church, the Chicago Historical Society and the Art Institute of Chicago.

Fannie died in 1942 at 73 and was buried beside her huasband. Their two sons David and Wallace entered executive ranks in the Kimball company in the 1930's.

Although Curtis left Iowa at an early age, his upbringing on a pioneer farm gave him a good foundation for the leadership role he played all his adult life. In a changing world, he kept in close touch with family back in Iowa and passed on the values he had learned there to his children, friends and associates.

The father of C. N. Kimball, a native of the state of Maine, settled in Mitchell County, Iowa, some eighty years ago where he was a farmer up to the time of his death. The Kimball family home was not far from the town of Osage. At this home Curtis Kimball was born in 1862.

His father, David Wheeler Kimball, had come west a little in advance of his brother, William Wallace, who located in Chicago and, as authentic music trade history tells us, started to sell pianos in the 50's. From this beginning the W. W. Kimball piano business started in 1857, later becoming the W. W. Kimball Company, the name it bears today.

Mr. and Mrs. Edwin Nelson Kimball, Jr. - Mr. Kimball was the nephew of Curtis N. Kimball, President of the W.W. Kimball Piano Company and grandnephew of William Wallace Kimball, founder of the company. The Kimballs left the Titanic in starboard side lifeboat No. 5, which had been lowered at 12:55 a.m.

[ Photo of Curtis is from Mitchell County History, 1989 ] 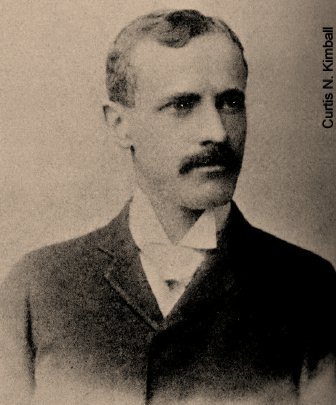