In August 1882 James and Margaret and Gilbert and Martha Rice were involved in developing the town of Park Rapids, Minnesota.

The August 3, 1882, Enterprise states that Mr. Cutler was overwhelmingly re-elected mayor of Osage, Iowa, the county seat of Mitchell County, where he had resided for 32 years, despite his declared intention to move to Minnesota and his purchase of a half interest in the Park Rapids town site.

The August 10, 1882, Enterprise mentions that the Honorable J. B. Cutler returned to Iowa and would promote the settlement of Park Rapids from his home in Iowa.

In 1850 when James B. Cutler made an inquiry of the Pottawattamie Indians near the Iowa-Illinois border they gave him a very flattering account of Northeast Iowa. Cutler was the first white man to settle in Mitchell County. The water was clear and pure and the Wapsi at the present day town of Riceville flowed with such force that it was an ideal place to provide waterpower for whatever purposes the settlers decided. In fact much of Mitchell County had plentiful water in the form of springs, ponds, marshes, and swamps.

Below is a photo of James B. Cutler, from STANDARD HISTORICAL ATLAS OF MITCHELL COUNTY, 1911. 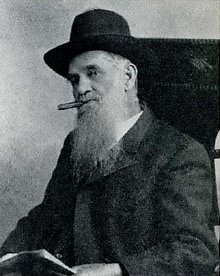