Marcia was born on December 14, 1954 in Winterset, Iowa to Edward and Lorraine (Shaw) Powell. She was a 1973 graduate from Winterset High School. In March of 1975, she was married to the love of her life, Meredith Bunky Meador in Winterset, IA. Before health issues forced Marcia to retire, she was the office manager for close to 30 years at Jerico Services in Indianola, IA.

Marcias grandkids meant the world to her. As long as she was able to attend, she never missed one of their activities and soaked up every second she could get with them. Marcia excelled over the years in planning and modeling amazing craft projects with her grandkids and nieces. If she saw a project, her goal was to create it. She and Bunky loved the camping experience with family and an array of friends as no one was a stranger to the two of them. She and Bunky enjoyed their volunteer work at the Warren County Fairgrounds and at Bridgeview Army Corps of Engineer Campground at Rathbun Lake as a camp host. She was a member of the Good Sams Club, Leisure World in Weslaco, TX, JUGS (Just Us Girls Stitching), and several other quilting clubs. Of all her projects, quilting was her ultimate joy. Marcia was one of the most giving people and would never expect anything in return for the beautiful creations she shared as gifts.

She is reunited in Heaven with the love of her life, Meredith Bunky Meador, and her parents, Edward and Lorraine Powell.

A private memorial service will be held at the Iowa Veterans Cemetery. 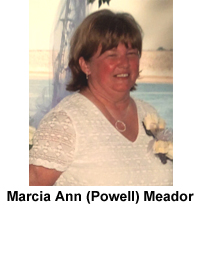