A private graveside service will be held in the Penn Center Cemetery in Madison County.

Charles Herbert Garrison was born on November 16, 1944, in Eunice, Missouri; the son of John C. and Edna (Sirdoreus) Garrison. He was united in marriage to Phyllis Hagar on November 27, 1965 in Winterset, Iowa. Phyllis preceded him in death in 2005.

In his early years, he was a brick layer and master fur trapper. While only attending school until the eighth grade, he was able to build a successful career as an auctioneer. He formed Garrison Auction Service in 1983 and owned and operated it for over 37 years. One of his favorite places to be was bellying up to the table playing cribbage and cards.

He was preceded in death by his parents, John C. and Edna Garrison; his wife, Phyllis; three brothers, Paul, Randy, and Ricky; a sister, Dorothy; a nephew, Michael Garrison; and faithful companion, Fritz. 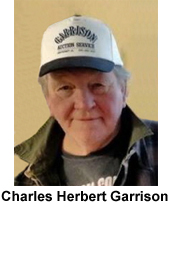