Helen Marie DeLong was born on February 9, 1939, in Hamilton, Ohio; the daughter of Walter and Irene (Eichstein) DeLong. She married Jerry Hacker on May 10, 1958.

She had been a resident of Winterset since 1996 and enjoyed working a variety of jobs. She was a homemaker, lunch aid at school, grocery store clerk, preschool aid and daycare provider. 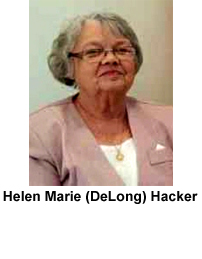