Fonda Bass, age 77, of Winterset, passed away on January 1, 2021. Funeral services will be for family only but the family will receive friends on Tuesday, January 5, from 4 to 6 PM at Caldwell Parrish Funeral Home Winterset Chapel. Memorials may be directed to Alzheimers Association of Iowa, 1730 28th St., West Des Moines, IA 50266 in Fondas name or directly to her family. A Celebration of Life Service will be held at a later date which will be open to friends and family.

Fonda Yvonne Schirm was born in Winterset, Iowa on January 15, 1943. Fonda was the daughter of Lloyd and Faye (Nichols) Schirm of rural Peru, IA. She grew up on her fathers farm near Peru. She attended the Peru school from kindergarten through eighth grade. She graduated from Winterset High School in the spring of 1961. She then attended The American Academy of Beauty in Des Moines and went to work as a beautician for Dorothy Bass in Winterset, Iowa.

She married Dick Bass on September 28, 1963. They were married in Winterset at St. Joseph Catholic Church.

The couple moved to Anaheim, California in November of 1963. Fonda worked as a beautician in Anaheim until the couple decided to return to Iowa in the fall of 1970. She especially enjoyed going to the beach at Laguna Beach, California. Many, many summer afternoons were spent there.

Upon returning to Iowa, she went to work for Mildred Guiberson at the Modern Beauty Salon and worked there from 1970 until 1991. She then went to work for Farmers and Merchants State Bank on May, 10, 1991 until her retirement on December 31, 2006.

Fondas favorite times were the Madison County Fair, the Iowa State Fair, and the Madison County Covered Bridge Festival, or any other time she could be with family and friends. She also enjoyed baking pies, occasionally surprising one of her friends with a fresh pie.

She was preceded in death by her son, Douglas Allen Bass; her parents, Lloyd and Faye Schirm; and her brother, Rick Schirm. 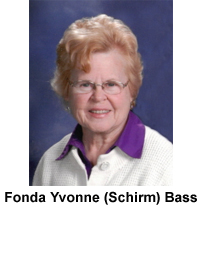