Agnes Celeste (Kelleher) McLaughlin was called home by our Dear Lord on 31 December 2020 at the age of 88. Go raibh do anam a bheith ar dheis Dé ~May Your soul be on God's right hand.

Agnes, affectionately called Ag by her siblings, was born into a large loving Irish Catholic family on 2 December 1932. Agnes was the daughter and the eleventh of fourteen children born to Thomas Francis II and Sarah Ellen Cecilia Nelle (Cash) Kelleher. Agnes was the granddaughter of T. F. Kelleher who was the first Chief of Staff at Mercy Hospital in Des Moines, Iowa. Agnes was proud of her Irish heritage being a four cornered Irish woman having all four of her grandparents being of Irish ancestry. Her favorite color was Kelly Green. Agnes spent her early years living on a farm in the Irish Settlement near Cumming, Iowa and later she moved with her family to Des Moines. Agnes attended Catholic school and graduated from the all girls Catholic High School St. Joseph Academy in 1950.

Agnes met the love of her life Raymond Joseph McLaughlin through a young peoples Catholic Club in Des Moines and they were married on 19 February 1955. Agnes became a farmers wife and lived on a farm in the Irish Settlement for the rest of her life. Agnes and Ray raised a large family of five sons and two daughters. She was a homemaker and after raising her children she worked outside of the home for several years, including Des Moines University. Agnes was a very active and devoted member of Saint Patricks Catholic Church in the Irish Settlement teaching Religious Education, serving on the Altar and Rosary Society, assisting in the annual Saint Patricks Dinner and Dance, and she enjoyed baking sweets for its booth at the annual Covered Bridge Festival. Agnes enjoyed traveling with her husband Ray to several states in America including Hawaii, Rome, Italy, Germany, and Canada. She was very happy to visit the Emerald Isle of Ireland with her husband Ray and visit the homeland of her Irish Great-Grandparents. Agnes was an avid reader of mystery novels and she enjoyed watching Masterpiece Mysteries on television. She enjoyed listening to Iowa Hawkeyes, Iowa State Cyclones and Dowling football and basketball games and Chicago Cubs baseball games on the radio while she prepared meals for her large family in her farmhouse kitchen.

Agnes will be remembered for her warm smile, quick wit, the beautiful sparkle in her bright blue eyes and the tremendous devotion of love and unselfish caring for her beloved husband Ray for 15 years after his debilitating stroke. Agness family believes that she was a living Saint on earth as she always put her husband and her family above her own needs. She lived and practiced her devoted Catholic faith daily through all of lifes challenges. Agnes was an inspiration of strength to each of her children and she was a heroine to her grandchildren.

In lieu of flowers the family requests donations be made to EveryStep Kavanagh House or the National Shingles Foundation (National Organization for Disorders). 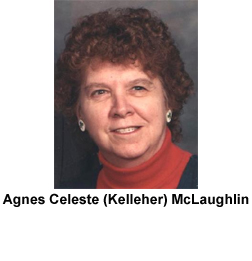