Jonathan Allen Gordon died Sunday morning, at the home of Mr. and Mrs. E. Kipp, near 73 years of age. His parents, Ervin and Sarah Gordon, started from Pennsylvania for the west, living in Indiana before locating in Madison county in 1852. Lincoln township was the original home of the family for twelve years, then the family came to Winterset.

In 1862, Jonathan, then about 17 years old, joined Co. F. 39th Iowa Volunteers as drummer, continuing in that service nearly a year, being discharged for physical disability. He taught school for several years, then took up farming west of Winterset, where he lived until the death of Mrs. Gordon two years ago. He was the last of his family and leaves one son and one daughter.

He was a member of the Christian church for over 30 years and affiliated with Pitzer Post, No. 55, G.A.R. for years. Mr. Gordons association with the Civil War Musicians, has made him a well known figure at all local and state patriotic gatherings, wherever the veterans appeared. Musical by nature, he dearly loved his drum and enjoyed nothing better than to pursue his favorite occupation of accompanying the fife in stirring martial music.

In the year 1852 he came to Iowa with his parents, William and Sarah Gordon, and settled on a farm six miles west of Winterset where he lived until he grew to manhood. He received his early education in the old stone school house that stood where the present Beerbower school house stands and later finished his education in the Winterset high school.

In 1862 he enlisted for service in the 39th Iowa Infantry and served one year, being discharged after that time on account of disability.

He was married to Mary Jane Kellogg, September 30, 1865. To this union was born six children, three girls and three boys, Elmer Gordon, Earlham, Iowa and Mrs. Ednie Gilliland still survive him. Ellsworth, who died in May, 1910 and Emmett, Elnora and Elsie all dying in infancy. Besides his son and daughter he leaves seven granddaughters, one grandson and one great grandson.

The deceased was a member of the First Christian church of his place and was also a member of Pitzer Post G. A. R. and his old comrades will have the concluding service of this.

Being born a cripple and having many infirmities throughout his life he was unable to accomplish all that he otherwise might have done. His likes and dislikes were very strongly manifested. To his friends he was generous and considerate. If he failed at all times with others, let us remember his physical weaknesses and exercise charity. He possessed many good qualities, which he exercised in deeds of kindness which characterized his life as a soldier, as a public school teacher and as a neighbor.
________________________

Jonathan Gordon, who died in Winterset Monday, had lived in and near the town as long as any man. He was a little crippled boy when his father came to Winterset in 1852. He was only a boy when he joined the army in 1862 as a drummer, having been rejected as a soldier on account of his deformed arms. He came home from the war and four or five years afterward married Mary Kellogg. They bought the little ten acre tract west of the city and lived there the rest of their lives.

Jonathan Gordon was an eccentric man, as most men with a deformity are, but he had a brave heart and indomitable courage. Physically handicapped to such an extent that most men under similar misfortune would have been a county charge, he bravely worked his own way and made a living for himself, his wife and his children in times when a living was hard to make off of a ten acre field.

He was a lover of music and had great musical talent. There was not a musical instrument made that Jonathan Gordon could not get real music from. Some of the drums and dulcimers that he made were fine pieces of workmanship. He was a splendid neighbor and his house was a home for any man who chose to walk in.

We are to apt to remember a mans eccentricities, and forget his sterling qualities. Here was a man who ordinarily would have been a family or a community charge. He went to war and made a good soldier. He worked when it was a marvel that he could work at all and he endured privations and hardships without a complaint. He refused to believe that he was handicapped and with rare courage and determination won his way where others would have failed.

The News editor lived just across the road from Jonathan Gordon for many years. He pays his tribute to him, remembering his kind acts and his friendly assistance in boyhood days, joining with the community in its sorrow in the death of this old soldier. 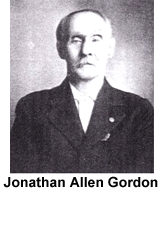