Wiin Yin CHIN BOUTTENOT, 79, died Thursday, Nov. 10, 2022, among the gardens she loved in Fairfield. A service will be held at 5 p.m. Sunday, Nov. 13, in the Sanctuary of the Golden Magnolia Sanctuary, 200 S. Main St., the former First Presbyterian Church. Memorials to the family may be sent care of Cranston Family Funeral Home, P.O. Box 189, Fairfield, IA 52556. Friends may leave online condolences at www.cranstonfamilyfuneralhome.com.

Woon Yin grew up in Malaysia and immigrated to the U.S. in 1973 to study art in Toledo, OH. She met her long-time partner Carl EKLUND and they had three children. Together, they worked in their commercial greenhouse in Tecumseh, MI. She moved to Fairfield in 1980 to join the Transcendental Meditation movement, working in the kitchen to feed MIU faculty and staff. Ever a plant lover, she cultivated and sold large succulent and cactus arrangements in her backyard greenhouse as well as establishing a small landscaping company called Plant Art, through which she cared for many home gardens. Plant Art also did interior plant design and maintenance for local businesses. She retired in 2017. In her later years, she enjoyed traveling and spending time with family and her grandchildren. She brought joy to many with her artistic plant designs, fine and generous cooking and giving and compassionate nature.

She was preceded in death by her father; mother; first husband; former partner and brother, William CHIN. 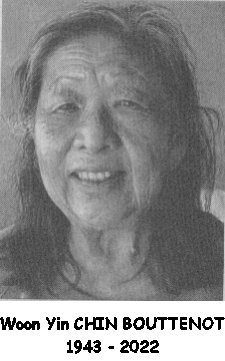