Stephen Douglas BLACK, 80, passed away peacefully at home; surrounded by his loving family in Olon, Ecuador, on October 12, 2022.

Stephen was born on July 3, 1942, in Philadelphia, Pennsylvania, to Wilford and Beatrice BLACK. He grew up in West Chester, Pennsylvania, where he graduated high school. Stephen was a veteran of the United States Air Force. He attended college in Pennsylvania and received his degree in electrical engineering.

Stephen married in 1984 and together with his first wife Nancy, had a daughter and a son. They moved as a family to Fairfield, Iowa, ten years later where Stephen was self-employed.

Stephen loved spending time walking in nature, camping, etc. He had a droll sense of humor and appreciated a clever pun. He had a passion for science and possessed an innate sense of how things worked. He enjoyed reading "Scientific American" and "Popular Mechanics" magazines. He also had a keen interest in classic cars. While a man of science and engineering, he was also a very spiritual being. Stephen also enjoyed the arts; he often attended performances around Fairfield, starting way back with the summer municipal band concerts on the square in the mid 90s.

In 2000, Stephen remarried in Fairfield, Iowa, and became father to his beautiful stepdaughter Kayla.

Thoughout his many years in Fairfield, he offered his services as a handyman, providing countless households with skillful repairs and the realization of every manner of home improvement project. Indeed it would be fair to say that he could fix everything, including the kitchen sink.

In 2022, Stephen relocated to the town of Olon in the Pacific Coast of Ecuador to enjoy the climate and spending time with his son and daughter-in-law.

Stephen is survived by his former wife, Nancy MATHERLY GREEN; his son and daughter-in-law, Keenan BLACK and Lilu PAPP; his daughter, Kayla FRENCH; his sisters, Shirley BARRY and Cynthia HAZEN; and his brother, David BLACK.

Stephen was preceded in death by his parents and grandparents; his beloved daughter, Patricia Joy BLACK; his dear second wife, Helen "Weegie" FRENCH; and his brother, George HODGSON.

Rest in peace, dear Stephen. He was a bright, spiritual, kind and loving family man! A memorial celebration of life honoring Stephen is set to take place at the Phoenix Rising Hall in Fairfield, Iowa, on Sunday, December 4, at 2:30 p.m. All who knew him are invited to attend. 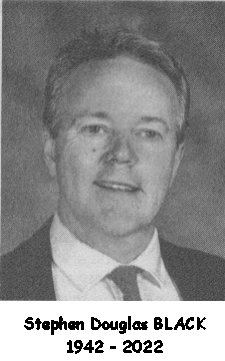