Esther was one of the founding members of the Hospital Auxiliary and volunteered at the Bargin Box for 30 years. She was also a member of the Women's Club and Ruth Circle of the United Methodist Church.

Esther was an avid bridge player. She learned at the age of 92 how to play Wii Bowling and was very competitive. She and Bruce traveled all around the world. Esther enjoyed crocheting and reading.

Esther was preceded in death by her parents, Osmund and Ada; and her husband, Bruce.

A Celebration of Life will be held at a later date.

Memorials may be made to Hospice Compasses (sic) and mailed to Stan PLUM, 1205 Gerlock Ct., Carterville, IL 62918. 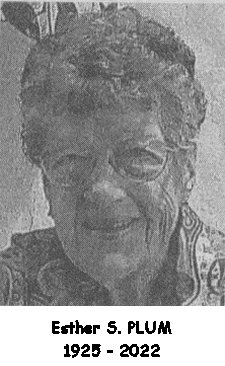