Jim was born January 28, 1947, in Fairfield, to James "Tip" and Thelma (LYONS) SIMPSON Sr. He married Mary ZARAGOZA and they later divorced. On October 4, 1991, he married Linda Kay STAGERS. The have been blessed with 30 years of marriage.

Jim lived in Fairfield all his life and graduated from FHS. He also attended Parsons College from 1965-1967. Jim served in the Army during the Vietnam War (sic - Vietnam Conflict). He worked 30 years at Dexter on the line retiring in 2008 and was also a member of the UAW Union. Jim was a member of the Walton Club, VFW and also the Eagles. He loved playing golf, fishing, gardening and reading. Jim was an Iowa Hawkeye and St. Louis Cardinal fan. Most important was spending time and following his kids and grandkids activities.

He was preceded in death by his parents, Tip and Thelma; and two brothers, Tom and Joe "Larry" SIMPSON. 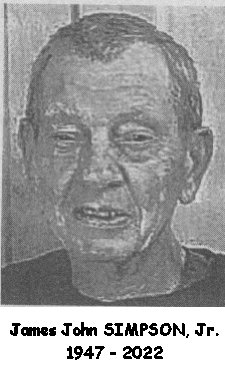