Last rites will be Wednesday morning for Robert W. FRY, 31, Fairfield man who lost his life as a result of a traffic accident north of Fairfield Saturday afternoon.

He passed away about 2:40 a.m. Sunday at the Jefferson county hospital where he was taken following the two-truck crash.

The accident took place about 1 p.m. Saturday four miles north of Fairfield on Highway No. 1.

FRY was going north in a pickup truck owned by Dick Day, Fairfield. He was employed by Day and operated heavy earth moving machinery.

As the pickup truck came over a small hill FRY noticed a 1½ ton truck ahead of him slowing down. He started to go around the truck ahead then noticed a car coming from the opposite direction, and a tractor ahead of the first truck waiting to make a left turn into a farm driveway.

FRY applied the brakes on his truck and attempted to swerve to the right to avoid a collision with the truck ahead. But his vehicle hooked the right rear corner of the grain truck ahead driven by Merrill Bishop, route 2, Fairfield.

FRY was thrown from his truck at the point of impact and was hurtled about 60 feet into the grader ditch on the west side of the road. His own truck passed over him.

The injured man was rushed to the hospital by ambulance. Officers who investigated the crash said he appeared to be suffering from a skull fracture, other multiple fractures and internal injuries.

The tractor and the car were not directly involved in the crash. The tractor was operated by Charles Flinspach, Fairfield, and the car was driven by Mrs. John Martin, Wayland.

The grain truck, owned by Julius Diers, Brighton, left the road and ran in the grader ditch on the east side of the highway after the impact. The driver was not injured.

FRY is the fourth person fatally injured in a traffic accident in Jefferson county this year. And all of them were killed on Highway No. 1 north of Fairfield within a distance of about four miles.

Two of the other accidents involved only one car running off the pavement, and the other was a triple crash with three cars involved.

The first of the four fatal accident occurred on July 9.

Last rites will be at 9 a.m. Wednesday at the St. Mary Catholic church with the Rev. O. F. DeCoursey and the Rev. Francis Henricksen officiating. Burial will be in Evergreen cemetery. The Rosary will be recited at the Weston Behner funeral home at 8 p.m. Tuesday. The Knights of Columbus, of which he was a member, will recite the Rosary tonight at 8 p.m. at the funeral home.

He was united in marriage to Jo Ann PECK on May 29, 1954, at Fairfield. The family home is at 202 W. Adams street. He was a member of the St. Mary Catholic church and the Holy Name Society.

Besides his wife, he is survived by four small children, Rebecca Sue, Connie Lou, Diana Lynn and Gregory Warren, all at home. He is also survived by his parents and one brother, Glen E. FRY, Soap Lake, Washington.

He was preceded in death by a brother who was also killed in an auto accident in Van Buren county about five years ago.

[Note: The photo appearing at the bottom of this posting was part of the above article. The short article below this point was separate from the one above, and followed the above article's continuation on Page 6.]

Will Start Fund For FRY Family

Friends and neighbors of the Robert FRY family announced today they are starting a fund for the FRY family.

They requested those wishing to contribute cash gifts to the fund to leave their contributions at Ed's Shell Service station, 200 E. Burlington street.

They said a similar fund has been started in Stockport.

The late Robert W. FRY, Fairfield, was a partner with D. C. Day in the earth-moving business before his death last Sunday following a truck collision on Highway 1.

An earlier report erroneously stated that FRY was employed by Day. The two men had been in partnership since April, 1959. They did earth-moving work and pond construction in a three-county area.

FRY formerly worked for Day for a number of years before becoming a full partner. Funeral services for FRY, 31, were held today.

~~~~
Copied with permission from The Fairfield Ledger, Inc. IAGenWeb Bylaws PROHIBIT the COPYING AND RE-POSTING OF THIS MATERIAL IN ANY PUBLIC VENUE such as Ancestry or Find A Grave without WRITTEN permission from the submitter ~ copyright restrictions apply.
*Transcribed for genealogy purposes; I have no relation to the person(s) mentioned.

Note: Buried in Lot 4th.167. Wife Jo Ann subsequently remarried, to James ALLERDICE who died in 2019; she survived him. 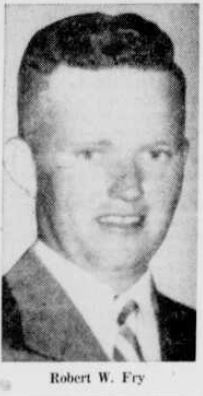