Additional data: His ashes buried 30 feet outside his office Window At Parsons Hall. This hall was torn down May 2000 by the new owners who purchased the property in l973 --Maharishi International University.
Quite a controversial event, see May 2000 Ledger
Newspapers

Jeff Mazer, veteran parachute jumper who has 320 jumps to his credit and holds a high altitude record, relates what happened just before and during the fatal parachute jump made by Robert WILLIAMS Saturday. Mazer, a senior student at Parsons college, is jump master for the Sharpchuters, and was in the plane when WILLIAMS jumped.

"Until ten second had passed after WILLIAMS had left the plane, everything about the jump appeared to be normal," Mazer related when asked to give his story of the accident.

"When the chute didn't open after ten seconds, the pilot and I knew something was wrong. We watched WILLIAMS continue to free fall until his body blended into the trees and brush below."

"After leaving the plane he was to free fall for ten seconds. He was in the usual spread-eagle position during that time. At about ten seconds he went into his position to pull the rip cord, but nothing happened.

"About that time he started a slow turn to the right which continued until his fall ended."

WILLIAMS was an experienced jumper with 50 successful jumps behind him, and Mazer stated, "I just can't figure out what happened." He was at a loss to figure out why WILLIAMS did not pull the cord on his reserve parachute if the regular chute had failed to open.

WILLIAMS was making what is known as a free fall jump. The jumper leaves the plane, and in this case had planned to fall for ten seconds before pulling the cord and opening his parachute. According to those who made a preliminary investigation at the scene said it appeared as if the cord had never been pulled.

Mazer said WILLIAMS left the plane at 3,500 feet. After free falling for ten seconds, he estimated it was 20 to 25 seconds more before he hit the ground.

The jump master said the jump was made from a six-place Cessna plane flown by Bill Keith, Ottumwa. The flight included three student jumpers, WILLIAMS, Mazer and the pilot.

The three students had jumped, with the plane making a pass over the jump area for each jumper. The students used a static line which automatically opens the chute as they leave the plane. WILLIAMS, being an experienced jumper and planning a free fall, did not use the static line.

Mazer said WILLIAMS appeared to be in his usual health when they took off for the jump flight, and that he and WILLIAMS had discussed the usual safety procedures before the jump was made.

"As far as I know, the jump was made according to the rules and regulations of the Federal Aviation Agency. All had gone normal until ten seconds of the free fall had passed."

Mazer was one of the early members of the Parsons Collete Parachute Club known as the Sharpchuters. It was organized in 1963 with WILLIAMS as one of the charter members. Mazer joined the club in November, 1964.

Mazer's education was interrupted by three years of service in the Armed Forces during which he served with Airborne Troops in Vietnam.

Following his separation from service Mazer returned to Parsons College in February this year to complete his education. He rejoined the Sharpchuters.

He holds the midwest high altitude record for parachute jumping. He jumped from 35,500 feet over the Ottumwa airport in February, 1967, the day before he reported for military service.

(same publication and page, below the masthead, Columns 1-3 -- )

Representatives of the National Transportation Safety Board are expected in Fairfield today or Tuesday to investigate the death of Robert WILLIAMS, executive vice president of Parsons College who was killed Saturday in a practice parachute jump at the old air port southeast of Fairfield.

Bill Angstead, Jefferson County sheriff, said the equipment used by WILLIAMS while making the fatal jump has been impounded by order of the Federal Aviation Agency until the investigating team arrives.

City Police and Angstead were among the first to arrive at the scene of the accident after it had occurred about 11:30 a.m. Saturday. It was about an hour later before the body was spotted from a search plane overhead. It was some distance from where the witnesses of the accident said it came down.

WILLIAMS landed in a timber on the Harold Fulton farm a short distance south and west of the runway at the old airport.

Angstead said the body was taken to Ottumwa where an autopsy was performed, but he results will not be known for several days.

The sheriff said as far as he can determine no one knows what happened while WILLIAMS was making his jump, or why the rip cord on the chute was not pulled. From all appearances after the body was found, he said the cord had not been pulled and the regular chute was still in its pack.

He said the reserve parachute, used only in case of emergency when the main chute fails, had broken open on impact with the ground.

When first efforts had failed to find the body, officers were in the process of organizing a "shoulder to shoulder" hunt through the timber.

About that time the body was spotted from a plane overhead. The search plane was volunteered from B Flight, Inc., at the Municipal Airport north of Fairfield.

Sheriff Angstead said WILLIAMS jumped from a Cessna 206 plane owned by Midwest Aviation of Ottumwa, and had taken off from the old airport.

A memorial service will be held for Robert WILLIAMS, vice president of Parsons College, at 2 p.m. Thursday at Barhydt Chapel on campus. Dr. Jack Steele of the college, and the Rev. Louis Valbracht, pastor of St. John's Lutheran Church in Des Moines, will be in charge.

A meeting of the Parsons Board of Trustees which had been scheduled for Oct. 22 and 23 in New York City has been canceled. Several of the members plan to attend the memorial Thursday.

Robert Wayne WILLIAMS was born March 13, 1922, at Albia, the son of James and Margaret RICHARDSON WILLIAMS.

He was married to Phyllis BIERMANN March 7, 1942, at Des Moines, who survives.

WILLIAMS received his BS and MS degrees from Drake University and was a candidate for a Ph.D degree from the University of Iowa.

In 1964 WILLIAMS was named comptroller at the University of Nebraska before returning to Fairfield in June, 1965, to accept the appointment of vice president for business affairs at Parsons.

In this position he was responsible for planning and construction, the office of comptroller, the College Book Store and all purchasing operations.

He helped organize the Parsons College Sharpchuters at the college and designed the club patch the members wear on their jump suits.

NOTICE OF PROBATE OF WILL, OF APPOINTMENT OF EXECUTOR, AND NOTICE TO CREDITORS

In The Matter Of The Estate Of Robert W. WILLIAMS, Deceased.

To All Persons Interested In The Estate Of Robert W. WILLIAMS Deceased:

You are hereby notified that on the 5 day of November, 1970, the last will and testament of Robert W. WILLIAMS deceased bearing date of the 21st day of August, 1961, was admitted to probate in the above named Court and that Phyllis E. WILLIAMS was appointed executor of said estate.

Notice is further given that any action to set aside said Will must be brought in the District Court of said County within one year from the date of the second publication of his notice, or thereafter be forever barred.

Notice is further given that all persons indebted to said estate are requested to make immediate payment to the undersigned and creditors having claims against said estate shall file them with the Clerk of the above named District Court, as provided by law, duly authenticated, for allowance; and unless so filed within six months from the second publication of this notice (unless otherwise allowed or paid) such claim shall thereafter be forever barred.

An autopsy report on the death of Robert WILLIAMS, Parsons College vice president who was killed in a parachute jump Oct. 17, indicates he did not suffer a stroke and did not suffer a heart attack during his fall.

As a result, the question why he did not pull the rip cord on his two parachutes still remains unanswered.

The pathologist's report and the report from the Federal Aviation Administration were received Wednesday by Dr. D. F. Watson, Jefferson County medical examiner.

The conclusion in the report submitted by E. L. Farnham, Federal Aviation Administation, reads as follows:

"It is concluded that Mr. Robert WILLIAMS lost his life in an intentional jump from the airplane because he did not open either of the two parachutes he wore."

The autopsy was conducted by David O. Holman, M.D., pathologist, at the Ottumwa Hospital Morgue. His report reads in part:

"Studies of the autopsy reveal only the injuries listed from the fall. The individual had very little arteriosclerosis and the same is true of the heart. No heart disease was demonstrated."

The same conclusion was given by George M. Hass, M.D., Division of Pathology of the Presbyterian - St. Luke's Hospital in Chicago.

The cause of death listed in the report was multiple contusions, lacerations and fractures of the head, torso and extremities.

On the death certificate, which will be filed at the Jefferson County Hospital, there is a space to list cause of death such as by accident, suicide, homicide or undetermined. "Undetermined" is written in the space.

The FAA report includes full details of the jump by Jeff Mazer, Parsons College student and veteran parachute jumper with 320 jumps to his credit. Mazer is also jump master for the school's parachute club, the "Sharpchuters".

Mazer was in the plane when WILLIAMS jumped at 3,500 feet. His jump was described as normal until after ten seconds had elapsed when WILLIAMS failed to pull the rip cord.

Mazer said at the ten second mark WILLIAMS appeared to take the position to pull the rip cord, but nothing happened. Mazer watched WILLIAMS' descent until his body blended with the wooded terrain below.

The FAA report said there was no indication of equipment failure in the parachutes which it said were properly packed.

They said the reserve parachute, used only in case of emergency when the main chute fails, had broken on impact with the ground.

In addition to his duties as vice-president of business affairs, WILLIAMS also headed the collee's development department.

Members of the Parsons Board of Trustees discussed staff reorganization at a meeting in Chicago last week, but no action was taken to fill the vacancy caused by WILLIAMS' death.

~~~~
Copied with permission from The Fairfield Ledger, Inc. IAGenWeb Bylaws PROHIBIT the COPYING AND RE-POSTING OF THIS MATERIAL IN ANY PUBLIC VENUE such as Ancestry or Find A Grave without WRITTEN permission from the poster ~ copyright restrictions apply.
*Transcribed for genealogy purposes; I have no relation to the person(s) mentioned. -Admin. 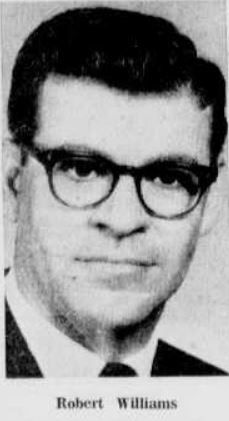