Harold F. JOHNSON, 89, passed away early Sept. 16, 2019. He resided at Arbors at Ridges in Burnsville, Minn., and formerly many years in Albuquerque, N.M. A funeral Mass will be held at 11 a.m. Saturday, Oct 12, at St. Mary Catholic Church in Fairfield with visitation at 10 a.m. Burial will be at Memorial Lawn Cemetery in Fairfield immediately following the service. Memorials may be made to Nuestro Pequenos Hermanos, www.nphusa.org or NPH USA, 134 N. LaSalle St., Suite 500, Chicago, IL 60602 or to a favorite charity in Harold's name. Friends may sign the online guestbook at www.cranstonfamilyfuneralhome.com.

Harold was born July 25, 1930, in Fairfield, Iowa, to Joe W. and Caroline (BUREKER) JOHNSON. He graduated from Fairfield High School and Iowa State College. Harold married Joan ZILLMAN on July 4, 1953, in Fairfield. He participated in Air ROTC at Iowa State and entered the U.S. Air Force after graduation. Harold served with distinction in assignments including Bitburg and Ramstein Air bases in Germany, RAF Mildenhall in England, as well as many locations in the U.S. and Vietnam. He retired as a colonel after 29 years of service. Harold and Joan resided many years in Albuquerque and enjoyed time at their cabin in the Brazos area of Northern New Mexico.

He is survived by sisters, Dolores SOMSKY and Joan (Eugene) HESS; sister-in-law, Margaret (Mike) McCREEDY; and many nieces and nephews.

Harold was preceded in death by his parents and wife, Joan. 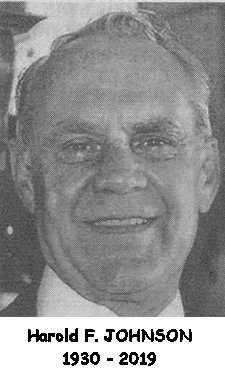