Joan Marie ZILLMAN JOHNSON, age 85, went to our ultimate home on July 21, 2015. She is survived by Harold, her husband of 62 years as well as sisters: Margaret McCREEDY (Mike), Nancy ENGWALL (Paul); sisters-in-law: Dolores SOMSKY and Joan HESS (Eugene), as well as several nieces and nephews. She deeply loved them all. Her sister Mary Ann preceded her in death.

She was the second daughter of George and Vera (McCLEARY) ZILLMAN and was born in Fairfield, Iowa. She graduated from Iowa State University and was a member of the Alpha Delta Pi sorority. She became a Registered Dietician and did her post-graduate work at the University of Minnesota.

Throughout her life, Joan maintained her interest in healthy foods and also became knowledgeable in Chinese, Hawaiian, French, and German food preparation. She loved the great outdoors, gardening of vegetables and flowers, animals, fishing, camping, traveling, and generally any place there was open air. She liked hedgehogs and had a large collection of them in crystal, metal, ceramic, and other mediums. Joan became especially interested in flower arranging when she was a member and officer in the Albuquerque Chapter of Ikebana International. She had a broad range of both interests and knowledge; playing the piano, reading, golf, and bridge playing were some of her favorite pastimes but she was also a wizard with a sewing machine, moderately good at oil painting and talented in various kinds of craft work. Unfortunately, many of these interests and abilities had to end when her eyesight was failing and blindness became complete.

She was known for her infectious laugh and for being a trusting and wonderful friend to many. Some of her happiest moments were while she spent beautiful days in beautiful surroundings at the Johnson cabin in the Brazos area of New Mexico.

Joan was a Air Force wife and accompanied her husband on assignments at Bitburg Air Base, Ramstein Air Base in Germany, RAF Mildenhall in England, Hickam Air Force Base in Hawaii, and Albuquerque (several times) as well as other locations in the United States. In Germany, in the 50s, she was the chairman of the Red Cross "Gray Ladies" at Bitburg Air Base. Later, she held the same position at the then-existing Sandia Base Hospital in Albuquerque.

Though we mourn Joan's passage to eternal life, we can always be thankful that she was a part of our earthly lives.

A rosary prayer service was recited on Monday, July 27, 2015 at 9:30 a.m. and Mass of Christian Burial was celebrated at 10:00 a.m. at Risen Savior Catholic Community in Albuquerque. Inurnment will take place at a later date at Memorial Lawn Cemetery in Fairfield, IA.

The family suggests memorial contributions be made in Joan's name to a favorite charity.

Please visit our online guestbook for Joan at www.FrenchFunerals.com. 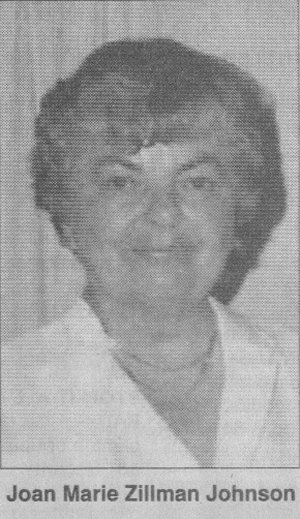