Wayne R. PARSONS, 93, of rural Richland died Monday June 11, 2018, at the Keokuk County Hospital in Sigourney. He was born in Jefferson County to Russell Otto and Mildred WHEELER PARSONS. Wayne attended country school near Richland and graduated from Richland High School in 1943.

He married Iola R. LOCK at the Woolson Friends Church on August 10, 1947 and she died March 12, 2017. Wayne lived on their farm south of Richland for over 67 years and farmed all of his life. He was an active member of Woolson Friends Church, serving on multiple committees, was a 4-H leader, past president of the Jefferson County Farm Bureau, served on the Jefferson County Conservation Board, Charter member and past president of the Richland Lions Club and member of Gideon's International.

He was preceded in death by his parents, wife and grandson James Franklin EASTMAN.

Visitation will be Friday June 15, 2018, 6-8 P.M. at the Woolson Friends Church Fellowship Hall. Funeral services will be 10:30 A.M. Saturday June 16, 2018, at the church with Rev. Kevin Rohr and Rev. Harlan Van Voorst officiating. Burial will be at the Blue Point Cemetery followed by a dinner at the church. Memorials to the Woolson Friends Church or Gideon's International, Sigourney Camp may be left at the church or mailed to the family at 1128 Ivy Avenue, Richland, IA 52585. Gould Funeral Home of Richland is assisting the family.

RICHLAND - A Richland man died in a motor vehicle accident Monday that closed Highway 78 in Richland for several hours.

Wayne R. PARSONS, 93, was transported by ambulance to the Keokuk County Hospital but was later pronounced dead.

The indicent occurred at 3:21 p.m. at the intersection of Highway 78 and 315th Avenue, which is on the south side of Richland. According to a crash report from the Iowa State Patrol, PARSONS failed to yield at the stop sign on 315th Avenue and was struck by a freightliner truck traveling on Highway 78. PARSONS was driving a 2008 Mercury Milan.

PARSONS's vehicle came to rest in a business drive in the northeast intersection, while the truck came to rest in the eastbound lane. The accident report indicates PARSONS was not wearing a seatbelt.

The name of the other driver was not listed in the Iowa State Patrol's crash report. It was not towed away, but PARSONS's car was.

The Iowa State Patrol was assisted by Keokuk County Sheriff, Department of Natural Resources, Department of Transportation and Richland Fire and EMS. 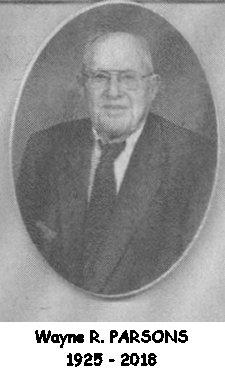