Behner Funeral Home is assisting the family with arrangements.

Visitation for family & friends will be 10:00 am - 11:00 am, Monday, January 15, 2018, at Behner Funeral Home. A memorial service will follow the visitation starting at 11:00 am with Pastor Danny Cary officiating. Burial will be at a later date.

George was born October 22, 1924, in Fairfield, IA to Bruce and Pauline (JACKSON) BRADFIELD.

He was united in marriage to Isabel PARSONS on November 30, 1949. They were married 58 years before she passed away May 24, 2008. Later he married Evelyn FULCHER.

George graduated from Fairfield High School Class of 1942. He farmed in Jefferson County in the Abington area until he retired when he moved to Fairfield. George was a sports enthusiast. One of his favorite sports to play was baseball and he followed the Iowa Hawkeyes and Chicago Cubs. George was a member of the Free Methodist Church, Packwood Lions and a Mason.

He was preceded in death by his parents, Bruce and Pauline BRADFIELD; his wife, Isabel BRADFIELD; one grandson, Levi GOTT; and two brothers, Billy and Paul BRADFIELD.

Note: First wife Isabel is buried in Memorial Lawn Cemetery, Fairfield, in Lot Devotion B 67, space 3, where she and George have a joint headstone. 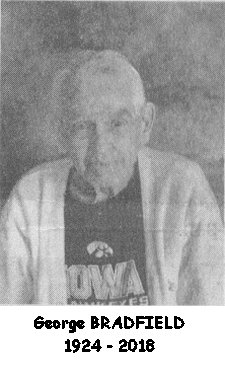