Donald Lee "Butch" POTTORFF, 75, of Phoenix, Oregon, and formerly of Fairfield, died at his home.

The funeral, with military honors, will be 11 a.m. Friday at Memorial Lawn Cemetery in Fairfield. The Rev. Herb Shafer will officiate.

The family will receive friends at 10 a.m. Friday at Raymond Funeral Home.

A memorial fund has been established to be determined later.

He grew up in Fairfield and graduated from Fairfield High School in 1960.

He served in Dompany D, 224th Engineer Battalion in Fairfield before he served as a staff sergeant in the U.S. Air Force in Vietnam.

He had served as a Baptist minister and later was a truck driver. He enjoyed hunting, fishing and hearing from several of his high school buddies.

He was preceded in death by: his parents; and one grandson. 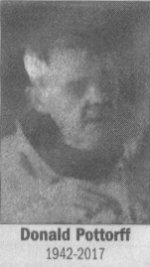