The funeral wil be 11 a.m. Wednesday at Behner Funeral Home, with the Rev. Danny Cary officiating. Burial will be at Memorial Lawn Cemetery.

Visitation is 10-11 a.m. Wednesday at the funeral home.

Mr. DALTON worked at Utopia Park for 20 years in the maintenance department.

He enjoyed watching NASCAR racing and at one time drove a stock car. He loved the outdoors.

In addition to his wife, he was preceded in death by: his father; and stepfather, Roy LOWE. 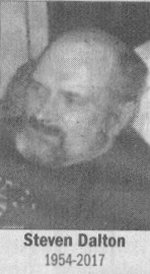