A funeral and burial service will be at 11 a.m. Friday at Raymond Funeral Home in Fairfield. Interment will be in Lockridge Cemetery.

For Colorado friends, visitation will be 5-6 p.m. today at Bullock Mortuary in Englewood, Colorado.

In lieu of flowers, memorial donations can be made to Porter Hospice Residence, 5020 E. Arapahoe Road, Centennial, CO 80122.

Mrs. BERG received her Registered Nursing degree from Southeastern Community College in 1984. She worked at Mid-Missouri Mental Health Center and Boone County Hospital before her retirement.

During the last three years, she lived in Denver, Colorado, with her daughter and family.

Survivors include: one daughter, Christina ANGELOFF with Clark D. Adams; and one grandson.

In addition to her husband, she was preceded in death by: her parents; two brothers, Walter VORHIES and Donald VORHIES; and three sisters, Margaret ESHELMAN, Elaine McCLURE and Helen VORHIES. 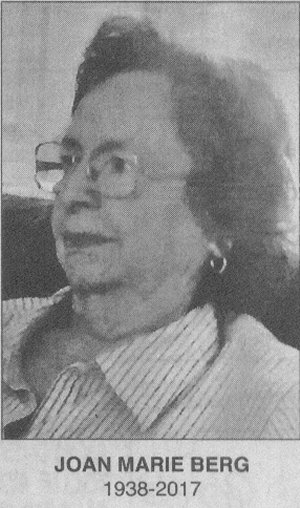