Funeral services are pending at Raymond Funeral Home in Fairfield.

He was born December 15, 1925, at Clear Creek, Iowa, the sixth child of Christina GREINER and William ADAM.

Richard grew up on the family farm near Talleyrand, Iowa and graduated from Clear Creek Catholic School. He married Marlys Lou BECHEN on June 22, 1948, at Lake Andes, South Dakota. They farmed and raised their family west of Packwood. They lived on their farm for 44 years before moving to Fairfield in 1994.

A funeral Mass will be conducted at 10 a.m. Monday, February 6, at St. Mary Catholic Church in Fairfield; Father Nick Adam officiating. Interment will be in the Evergreen Cemetery in Fairfield.

Visitation with the family present will be 2-4:30 p.m. Sunday at the church with prayers for a Christian Wake after.

In lieu of flowers, memorials may be given to the A.L.S. Association or to St. Mary Catholic Church.

Arrangements are in the care of the Raymond Funeral Home. 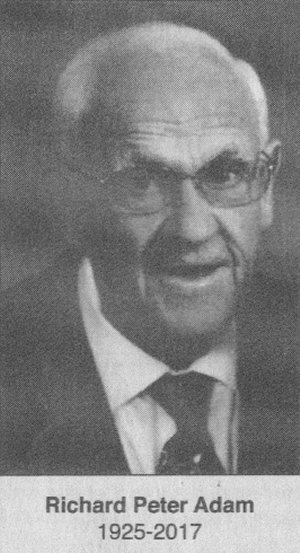