Funeral services to celebrate the life of Duane Paul "Dewey" MESSMER, 70, a resident of Davenport, will be 6 p.m. Wednesday, December 28, 2016 in the All Faith Chapel at Halligan McCabe DeVries Funeral Home, 614 N. Main Street, downtown Davenport. The family will greet friends from 3:00 p.m. until the time of the service Wednesday at the funeral home. Cremation will take place following services and burial will be at a later date. Duane passed away Thursday, December 22, 2016 at Trinity, Bettendorf.

Duane Paul MESSMER was born on July 10, 1946 in Davenport, a son of Fritz and Shirley (WALTERS) MESSMER. He was a 1964 graduate of Assumption High School. He was married to Teresa COLBERT and later Barbara Jean KORTH. On June 2, 1999 he was united in marriage to Marlene "Sue" GILL.

Dewey had worked in food prep at Texas Roadhouse for the past 14 years. He had previously been employed with Heinz in Muscatine.

Duane loved the St. Louis Cardinals and enjoyed attending as many games as he could in St. Louis. He also enjoyed going to the fair, dancing, hanging around his garage with friends, and NASCAR, especially Dale Earnhardt, Jr. and Jeff Gordon.

He was preceded in death by his parents. Online remembrances and condolences may be expressed to the family by visiting Duane's obituary at www.hmdfuneralhome.com 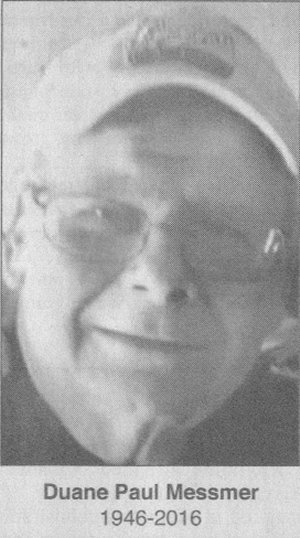