Funeral services will be held on Wednesday, January 6, 2016, at 10:30 a.m. at the Murphy Funeral Home in Mount Pleasant with Rev. Gloria Friedrich officiating. Friends may call after 1 p.m. on Tuesday at the Murphy Funeral Home where the family will receive friends from 6 to 8 p.m. that evening. Private family burial will be in the Lockridge Cemetery. Memorials may be directed to the Lockridge First Responders or to a charity of the family's choice.

Jack was born on February 11, 1943, on the family farm at Rome Iowa, the son of Frank & Marie ANDERSON ENSMINGER. Following his graduation from Mt. Pleasant High School in 1963, he was drafted into the United States Army and served his country in Germany. When he returned he was united in marriage to Saundra BURNHAM on November 24, 1968 at the First Augustana Lutheran Church in Lockridge. He worked for Hawkeye Erection before he retired. He enjoyed playing golf, reading and was a Packers fan, but most of all he enjoyed spending time with his grandchildren.

He is survived by his wife Saundra of Lockridge and his children; Staci (Kent) WORLEY and Thomas ENSMINGER (Britni) all of Fairfield, 4 grandchildren; Landon, Chase, Bennett and Leigha, two brothers Wendell ENSMINGER of Lockridge and Randy (Eileen) ENSMINGER of Mt. Pleasant and one sister; Janice (Tom) DANIELS of Chattanooga, Tennessee

Jack was preceded in death by his parents and two brothers; Donnie and Dennis.

Online condeolences (sic) may be sent to the family at www.murphyfuneralandmonuments.com

Murphy Funeral Home of Mt. Pleasant is handling the arrangements. 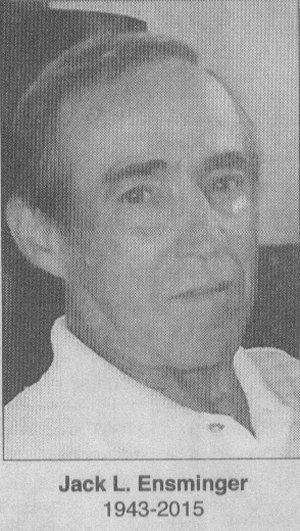