James Frederick HINKHOUSE, age 86, of Boise, ID, died at his home on December 31, 2015, surrounded and supported by his loving family, one day after celebrating his 54th wedding anniversary.

Jim was born in Fairfield, Iowa on August 14, 1929 to the late Dr. Fred Junkin HINKHOUSE and Francis (DOOL) HINKHOUSE. Jim's early schooling was in the public schools of Fairfield, IA and at Parsons College. He later used the GI Bill to earn an MBA from the Wharton School, University of Pennsylvania.

Jim enlisted in the US Marine Corps in 1951 and went through boot camp at Parris Island, SC. He was commissioned as a second lieutenant in September of 1951 and served as an infantry platoon leader in Korea where he received two Battle Stars and a Bronze Star Medal with Combat "V".

Jim's business career began in 1955 with Scott Paper Company in Chester, PA and in 1958 he launched his 30-year career with IBM in Philadelphia. He met his wife Elsie in Harrisburg, PA and their life together took them to Wilton, CT, Cocoa Beach, FL, and Atlanta, GA. He retired from IBM in 1988, and enjoyed living in Caswell Beach, NC for 18 years before moving to Boise, ID in 2011 to be close to family.

Jim's community involvement included serving as an officer and president in homeowner associations and year round competitive swimming organizations. He served 20 years as an official for US swimming, including working at the Olympic Trails in 1992. He was also the Meet Manager for the Alamo Cup, between the US and USSR National Swim Teams, to help showcase Atlanta to the Olympic world prior to obtaining the Olympic Games in 1996. Jim was a longtime member of the town Planning Board in Caswell Beach, NC and a member of the Southport Lions and Oak Island Golf and Country Club. Jim was accepted to SAR (Sons of the American Revolution) in Boise. He was a member of St. Philip's Episcopal Church in Southport, NC and St. Michael's Episcopal Cathedral in Boise.

Elsie and Jim traveled extensively to all 50 US states, 75 countries, and all seven continents. Highlights of the many trips included: African game drives and tent camps; hot air balloon rides, bungee jumping; fishing for piranhas; dry landings on a zodiac boat in Antarctica; elephant, camel and burro rides; tours of the Amazon River, the Galapagos Islands, Victoria and Iguassu Falls, the Taj Mahal, Angkor Wat, and Machu Picchu; Christmas Eve in a tent in the Sahara Desert; visiting the HINKHOUSE ancestral home in Germany; visiting Dachau, the Vatican, Moscow's Red Square, and using a Eurail Pass from Helsinki to Stockholm, Oslo, Copenhagen, Berlin, and Munich. Last year, he celebrated his 85th birthday by making a tandem jump out of an airplane at Skydive Idaho.

A memorial service, designed by Jim, will be held at the Idaho State Veterans Cemetery on January 15 at 2:00pm, followed by a reception to be held at The Tuttle House at St. Michael's Episcopal Cathedral. Per Jim's wishes, in lieu of flowers, please make donations to a charity of your choice. 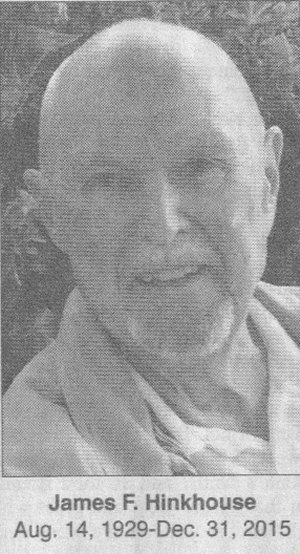