Funeral services will be 10:30 am, Monday, January 4, 2016 at Jefferson County Ag Grounds. Burial will be at Evergreen Cemetery, Fairfield, IA.

In-lieu (sic) of flowers, a scholarship has been established for future 4-H or FFA member. Cards and memorials can be mailed to: 2547 129th Street, Fairfield, Iowa 52556.

Ed graduated from Fairfield High School with the class of 1972. He was a farmer and raised cattle all his life. Enjoyed deer hunting. His passion was breeding and raising cattle on the family generation farm. Ed showed cattle at the State Fair throughout his entire life. He especially enjoyed time with his grandchildren.

He was preceded in death by his parents, Eugene and Irene ELMORE; Grandparents, Charles and Olivia ELMORE and Irvin & Ethel STORTZ.

~~~~
Copied with permission from The Fairfield Ledger, Inc. IAGenWeb Bylaws PROHIBIT the COPYING AND RE-POSTING OF THIS MATERIAL IN ANY PUBLIC VENUE such as Ancestry or Find A Grave without WRITTEN permission from the submitter ~ copyright restrictions apply.
*Transcribed for genealogy purposes; I have no relation to the person(s) mentioned.

Note: The birthdate below his photo appears to be incorrect; it should be 1954. 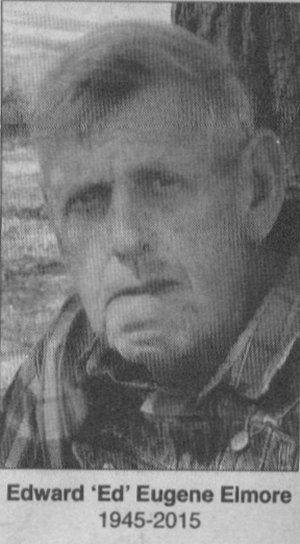