The funeral is planned for 10:30 a.m. Saturday at First Lutheran Church in Fairfield. Burial will be in the Memorial Lawn Cemetery in Fairfield.

Visitation will be 6-7:30 p.m. Friday at Raymond Funeral Home in Fairfield, with a time to share memories at 7:30 p.m.

She was born February 19, 1922 in Fairfield, the daughter of Harry and Irene DOWNS RINGELSPACH. She has been a resident of the Fairfield community all of her life.

She worked at John Morrell & Company before her marriage.

Doris married Donald L. JOHNSON on February 14, 1943 at the First Lutheran Church. Upon marriage, she assumed bookkeeping for the farming operation, which she continued until her death. She had done temporary work for 25 years at the Jefferson County Assessor's office.

She was the 4th generation of six generations member of the First Lutheran Church in Fairfield. She had been a Sunday School teacher, church council member and on the church remodeling committee and the altar committee and involved in the Women's work at the local, district and state levels. She served a secretary for Church Women United (sic), and Women of the Synod. A member of the Lutheran Women's organization since age 17. She was a member of the Republican Women local, district and served as state treasurer for 12 years, a member of the federal soil and water board. She was a former 4-H leader, Good Cheer Club, AARP and delegate for 2 years to the National Silver Haired Legislature in Washington, D.C., and board member and treasurer of the Jefferson County Agency on Aging. In 2011 she was selected as an Iowa Master Farm Homemaker.

Funeral services will be at 10:30 A.M. Saturday, May 16th at the First Lutheran Church in Fairfield with Pastor Stacy Grau officiating.

The family will greet friends on Friday from 6:00 until 7:30 P.M. at Raymond Funeral Home. At 7:30 P.M. Friday the family invites everyone for a time to share memories of Doris at the funeral home.

A memorial has been established to the First Lutheran Church and may be mailed to: Dee SANDQUIST at 2714 189th Blvd., Fairfield, Iowa 52556. 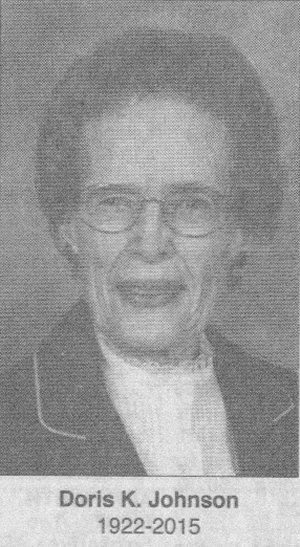