Born October 31, 1917 at the family home East of Fairfield, the son of Elmer C. and Edith EDMUND JOHNSON.

A farmer, he was a lifetime resident of Jefferson County.

Don married Doris RINGELSPACH on February 14, 1943 at the First Lutheran Church in Fairfield. They lived on the family farm in Buchanan Township until moving to Fairfield in 1977.

He served on the Soil Conservation Board at the local, state and national levels and was appointed to the ASCS (Agricultural Stabilization and Conservation Service) by President Ronald Reagan. He was a member of Rotary and served on the board of directors for the Jefferson County Mutual, Fairfield Community Schools, First National Bank and the Farm Bureau and Pathfinders RC&D (Rural Conservation & Development). He was named Iowa Master Farmer in 1959 and received the community service award as Fairfield Chamber of Commerce Citizen of the Year in 1982. He was active in politics.

He was preceded in death by his parents, a son Delbert Paul JOHNSON in infancy, a son Douglas Stephen JOHNSON on July 26, 2007, and his brother Lawrence JOHNSON.

Funeral services will be at 10:30 A.M. Wednesday at the First Lutheran Church in Fairfield with Pastor Marvin Robeck officiating.

The family will receive friends on Tuesday from 4:00 P.M. until 7:00 P.M. at the Raymond Funeral Home in Fairfield.

In Lieu of Flowers the family sincerely would appreciate memorials to the First Lutheran Church or to the Lord's Cupboard.

Funeral arrangements are in the care of the Raymond Funeral Home in Fairfield.

Online condolences may be sent in care of: www.raymondfuneralhomes.com. 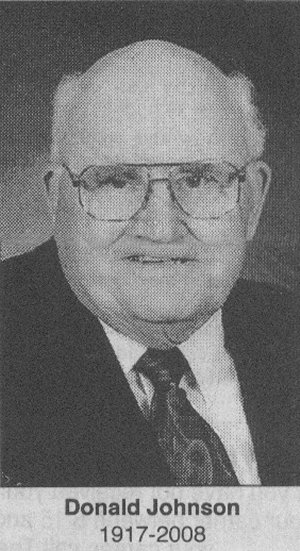