A graveside service is planned for 10 a.m. Monday at Memorial Lawn Cemetery in Fairfield, with Clayton Pickering and Jim Staats officiating.

The family will receive friends from 6:30-7:30 p.m. Sunday at the Raymond Funeral Home in Fairfield.

Memorials can be directed to Hospice Compassus, Parkview Care Center or to a charity of the donor's choice.

Mrs. CAMPBELL was born Nov. 13, 1914, in Des Moines county, Iowa, the daughter of Lloyd and Catherine TEBERG JACOBS. She married Clay CAMPBELL May 29, 1935, in Fairfield.

Mrs. CAMPBELL had lived in Naples, Florida, for 13 years, but lived most of her life in Jefferson County.

She was a homemaker. She worked as a beautician in Waterloo for several years.

She was a member of Faith United Methodist Church in Libertyville.

She was preceded in death by her husband; her parents; and one brother Frank JACOBS. 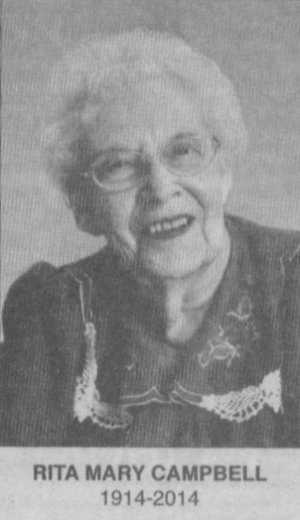