A funeral is at 10 a.m. Tuesday, at Faith Lutheran Church in Mount Pleasant, with the Rev. Michael R. Scudder officiating. Burial will be in Lockridge Cemetery with military rites by the Henry County Honor Guard.

Visitation begins at noon Monday at Elliott Chapel in New London with the family greeting friends from 6-8 p.m.

A memorial has been established for Faith Lutheran Church.

He was a 1939 graduate of Lockridge High School. He earned a bachelor's (sic) of arts degree at Parsons College in 1947.

He was a member of the Chi Beta Phi Scientific Fraternity.

Mr. HILDEBRAND was a World War II veteran, serving from Sept. 3, 1942, to Oct. 18, 1945, with the Sixth Air Force overseas. He was 21 years old at the time he enlisted, leaving behind his wife and 5-month-old son; he did not see them again until his son was 3 years old. He received an American Theater Ribbon, a Good Conduct Medal and was honorably discharged. He contracted an inner ear infection in the military and lost all hearing capability except for 10 percent in his right ear. He coped with this disability for the rest of his life by using a hearing aid (sic) and reading lips.

He was a lifetime member of the Disabled American Veterans Michael Houshin No. 4 Post in Burlington, the VFW Post 7641 in New London and a member of the Amvets in Mount Pleasant.

He belonged to the Moose Lodge No. 1003 in Mount Pleasant where he held several offices through the years.

He was a past member of the Eagles Lodge (sic - Aerie or Club) and American Legion.

He taught science in Libertyville, Birmingham and New London from 1947-1952.

He went to work as a lab technician at Iowa Army Ammunitions Plant in Middletown and retired 23 years later as senior scientist.

He played the saxophone and banjo in several dance bands for many years and belonged to the Musicians Protective Union Local 646 in Burlington until 1986.

He also played the piano and tuned pianos in southeast Iowa and Illinois. He tuned Conway Twitty's piano prior to his performance at the Old Threshers Reunion.

In addition to his wife, he was preceded in death by his parents and one brother, Willis HILDEBRAND. 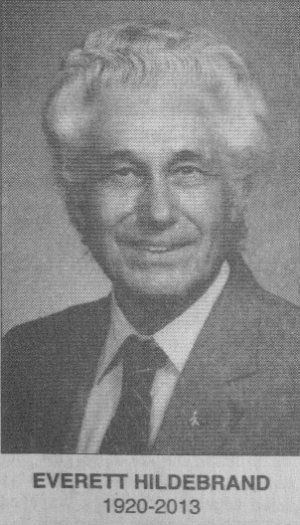