A service is at 11 a.m. Wednesday at Behner Funeral Home with the Rev. Danny Cary officiating. The body has been cremated. Burial with military rites will be in Memorial Lawn Cemetery.

Visitation for family and friends is 10-11 a.m. prior to the service.

In lieu of flowers, memorials may be made to the American Cancer Society or Relay for Life. Cards and memorials can be sent to 909 S, Seventh St., Fairfield 52556.

He graduated from Montezuma High School with the class of 1947.

He lived in the Fairfield area since 1955.

He worked for Universal Producing Company and Conrad American for many years.

After retirement, he worked for Pinkerton Security at Meritor and transported vehicles for Smithburg Automotive and T&T Auto.

He served in the U.S. Air Force as a staff sergeant in the occupational forces European Theater during the Korean conflict.

His hobbies and interests included attending and being involved with youth sports, coaching and participating in fast pitch softball and bowling.

He was preceded in death by his parents; one brother, Max SPEAS; one sister, Lela SPEAS; and one grandson. 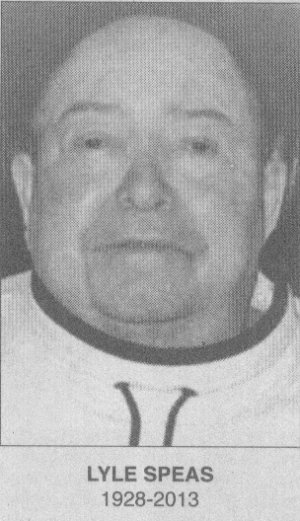