Donald Eugene LAUDER, age 86 of Fairfield passed away April 25, 2013, at Jefferson County Health Center. Funeral services will be held at 10:00 A.M. Wednesday, May 1, 2013, at the Raymond Funeral Home in Fairfield with Pastors Danny Cary and John Benedict officiating.

Burial will be at the Antioch Cemetery with Military Honors following the funeral service.

Visitation for family and friends will be on Tuesday, April 30th at the Raymond Funeral Home from 6:00 until 8:00 P.M.

Memorials may be made to the Antioch Church or cemetery fund and the V.F.W. Flag Replacement fund. Cards and memorials can be sent to Darlene LAUDER, 606 West Harrison Ave., Fairfield, Iowa 52556.

Don was born February 12, 1927, on a farm in Jefferson County, Iowa to Clarence and Dorothy MACY LAUDER. He married Darlene CUSTER on February 27, 1953.

Don served 40 plus continuous years in military including 12 years of active duty in the United States Navy, Naval Reserve and retiring from the Iowa National Guard.

He served in World War II and the Korean War in the Pacific Theater of Operations. He received numerous military awards and commendations, including the Bronze Star.

He also was on the Veterans Honor Flight.

He was employed by the United States Postal Service and was a retired farmer. He received a Century Farm Award at the Iowa State Fair.

Don enjoyed working on the farm, traveling and sharing time with his family. He was a member of the Antioch Church, Fairfield Lions Club, Eagles Aries (sic - Aerie) 1927, V.F.W., American Legion, Amvets, DAV, Jefferson County Farm Bureau, First National Bank Heritage Club, Libertyville Travelers and J.C.H.C. Auxiliary . Don was also a 50 year member of the local I.O.O.F.. He served and received recognition of nearly 30 years as Treasurer of the Antioch Church, and was currently Treasurer of the National Active and Retired Federal Employees, Chapter 1814. He was also a volunteer at the Bargain Box.

Don was preceded in death by his parents, one brother Richard and infant twin brother and sister. 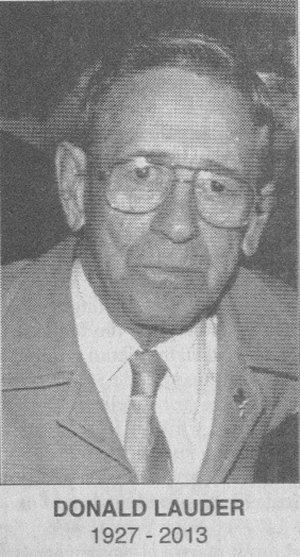