A funeral will be 10:30 am Tuesday at Behner Funeral Home. Burial with military rites will be in Memorial Lawn Cemetery.

Visitation for family and friends will be from 5-7 p.m. Monday with Masonic Rites.

Memorials may be made to VFW and Hospice Compassus. Memorials and cards may be sent to the family, 2377 Osage Avenue, Fairfield 52556.

Mr. STANSBERRY elisted in the Navy after high school and served on the USS West Virginia when the Japanese attacked Pearl Harbor.

After retiring from the Navy in 1955, he returned to the Libertyville area to work at the Atomic Energy Commission in Burlington.

He was part owner in S & R Equipment.

He later worked for Senior Community Service Employment Program under the Department of Labor as project director manager in Cincinnati, Ohio.

He and his wife retired to McAllen, Texas, in 1972, where he worked for the Mission Water District as manager until 1975.

He was a 50-year member of the Masons and the American Legion.

He was preceded in death by his parents; one brother, Robert, and one grandson. 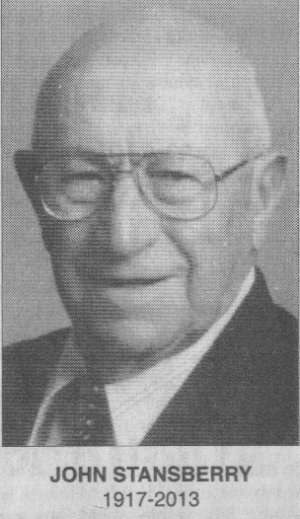