Funeral Service will be held 10:30 a.m. Wednesday, May 16, 2012, at Behner Funeral Home in Fairfield, Iowa. Pastor Danny Cary will be officiating.

Burial will be in Memorial Lawn Cemetery. Visitation for family and friends will be 6 to 8 p.m. Tuesday, May 15th, at Behner Funeral Home. Memorials may be made to Hospice Compassus, Diabetes Association, or to the Alzheimer's Foundation. Cards and memorials can be sent to Teressa COOK, 330 South Highway 1, Birmingham, Iowa 52535.

Patricia Sue COOK was born March 26, 1938, in Keosauqua, Iowa to Earl and Hazel McELWAIN WATKINS. She was a graduate of Van Buren High School and of Parsons College. She attended Indian Hills Nursing School and was a registered nurse at Jefferson County Hospital for 25 years.

Patricia enjoyed crocheting, cross stitching, crossword puzzles, reading and spending time with her family. She was affiliated with the Congregational Church.

Patricia was preceded in death by her parents and her husband, son: Steve COOK, infant grandson: Austin COOK, and her sister: Iris PARSONS. 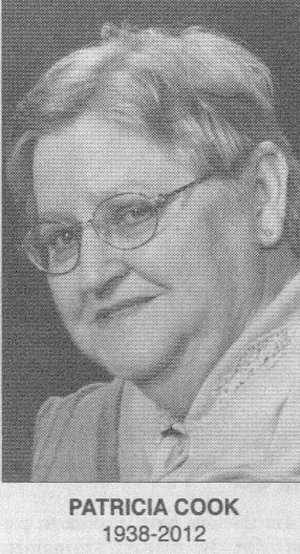