A celebration of his life will be held Thursday, May 17, at 10:30 a.m. at the First United Methodist Church in Fairfield, with Pastors Medea Saunders and Nate Nims officiating. Burial will be at Fairfield Evergreen Cemetery, with a luncheon following at the church.

Visitation will be held at Behner Funeral Home on Wednesday, May 16, from 5 p.m. to 8 p.m.

In lieu of flowers, the family has requested memorials be made to the Fairfield Evergreen Cemetery Association Memorial Fund.

Lewis was born June 7, 1928, in Fairfield. He was the son of Harry E. and Dorothy FISHER WHITNEY. He enjoyed a childhood of adventure with his friends and his two sisters, "Mag" and Linda.

He attended Fairfield High School and participated in many activities from music to sports.

Following graduation in 1946, Lewis enlisted in the United States Navy. He was stationed in the Great Lakes area serving as a pharmacist first mate and surgical assistant.

Upon discharge in 1948, Lewis enrolled at Drake University, majoring in Pharmacy. His time in college was cut short due to the death of his father. He returned home to Fairfield to help his mother and took over the family monument business. He did so the next 43 years, until his retirement in 1991.

On July 23, 1949, Lewis and his high school sweetheart, Mary Jane HESTON drove to Memphis, Missouri and married. The ceremony was followed by a stop at the Canteen in Ottumwa for their wedding dinner.

While living his life in Fairfield, Lewis was active in many organizations. He joined the Fairfield Elks Club in 1948. He was the oldest living past Exulted Ruler, past state Vice President and past District Deputy. He was a past President of the Fairfield Lions Club and past President of the Monument Builders of Iowa. He was a member of the Eagles and a 32nd degree Mason. Lewis was a member of the First United Methodist Church in Fairfield for over 72 years.

He enjoyed his time spent with his friends in the Methodist Men and during his free time, Lewis enjoyed spending time with his family, bird hunting, fishing and traveling.

He was preceded in death by his parents, his niece: Salena ALLERDICE and his grandson: Joshua WHITNEY. 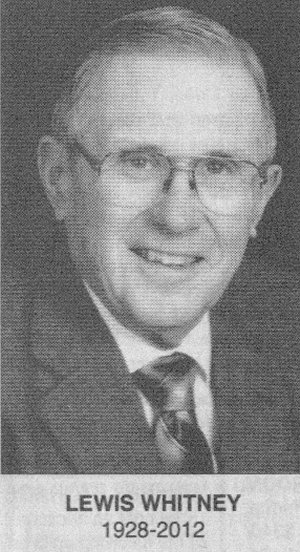