Allen W. WOLF, age 53, passed away at the University of Iowa Hospitals and Clinics in Iowa City, Iowa on April 14, 2012.

A Funeral Service will be held at Behner Funeral Home in Fairfield, Iowa at 1:00 p.m. on Wednesday, April 18, 2012. Pastors Danny Cary and Frosty VanVoorst will be officiating. Burial will follow in Packwood Cemetery in Packwood, Iowa.

The family requests memorials in lieu of flowers. Cards and memorials to the Pekin Dollars for Scholars Program or the Pekin Sports Booster Club can be sent to Lyle Wolf, 415 North Main Street, Packwood, Iowa 52580.

Allen W. WOLF was born September 4, 1958 in Fairfield, Iowa to Lyle and Judy BRAGG WOLF. He graduated from Pekin High School in 1976 and then attended Willian Penn College for two years. Allen finished his college education with a Business Degree from the University of Northern Iowa. While at Pekin High School he participated in football, basketball, and track. The 1975 football team finished 2nd in the Championship Game where Allen played center and defensive end. He earned 1st Team All-State Honors and played in the 1976 Iowa Shrine Bowl Game. He threw the shot put and discus in track where he placed 3rd at the State Meet. Allen held the shot put record at Pekin High School for 23 years. He was also a member of the National Honor Society. Early in his career Allen was employed by Pizza Hut as a traveling manager. He was honored by being named Manager of the Year for a three state area. He also held several accounting positions. The last one was with Sheaffer Pen in Ft. Madison, Iowa. Allen enjoyed watching college football and basketball, especially the Iowa Hawkeyes. He was also a Minnesota Vikings fan. Allen was a charter member of the Packwood Lions Club.

He was preceded in death by his grandparents. 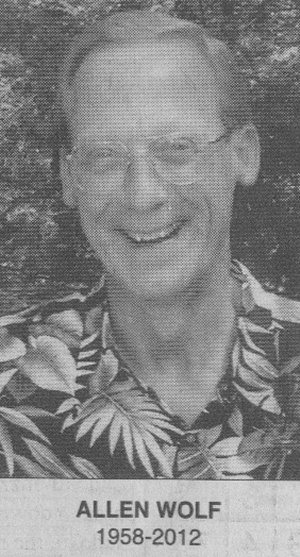