Double funeral services will be held at 11 a.m. Saturday for Mr. and Mrs. Maynard O. BARTON, both killed in a two-car collision near Wellesville, Mo., Wednesday.

The services Saturday will be at the First Presbyterian church with the Rev. James Robertson in charge. Burial will be in Evergreen cemetery. The bodies are being returned to the Weston Behner funeral home today.

Last rites will be at Mt. Pleasant Saturday for Mrs. BARTON's sister, Mrs. Ray PHILLIPS, 56, who was killed in the same crash.

Her services will be held at the Faith Lutheran church in Mt. Pleasant Saturday at 3 p.m. Burial will be in Elm Grove cemetery at Washington.

The Missouri highway patrol said a truck driven by Barnes L. Smith, 46, of Unionville, Mo., went through a stop sign into the path of the car at the intersection of Highway 161 and a rural road east of Wellesville in Montgomery county.

It is believed the three occupants of the BARTON car were killed instantly. Smith and a passenger in the truck were taken to a Mexico, Mo., hospital.

Maynard BARTON
Maynard O. BARTON, 58, was born Dec. 24, 1906, at Fairfield, the son of O. N. and Edna STEWART BARTON. He was reared and educated in the Fairfield community.

He was married to Myrtle B. STANSBERRY in September 1933, at Ottumwa. BARTON has been a barber for 40 years. He was associated in the barber business with his father for a number of years and operated a shop in Packwood for some time. He was a member of the Presbyterian church.

At the time of his death he operated the Barton Barber shop on the southeast corner of the square.

Maynard BARTON is also survived by his father, O.N. BARTON of Fairfield, and a brother, DeWayne BARTON, Libertyville. Another brother, LaMonte, preceded him in death on April 10 this year.

Myrtle BARTON
Mrs. Myrtle B. BARTON, 57, was the daughter of Thomas and Louisa TREON STANSBERRY. She was born Sept. 14, 1907, at Middletown, Mo.

The BARTON family residence is located at 407 E. Adams.

Mrs. PHILLIPS was employed at the Mental Health Institute at Mt. Pleasant. She is survived by six children. Her husband preceded her in death in 1960.

We wish to extend our heartfelt thanks to everyone who was so kind to us during the recent tragic loss of our loved ones; for all the flowers, cards, and personal words of comfort, to all the neighbors and friends who so graciously provided our meals, to Mrs. Heghin and the Presbyterian Church Circle who served our relatives the dinner, to Rev. Robertson and Weston Behner. Words cannot express the gratitude we feel.

~~~~
Copied with permission from The Fairfield Ledger, Inc. IAGenWeb Bylaws PROHIBIT the COPYING AND RE-POSTING OF THIS MATERIAL IN ANY PUBLIC VENUE such as Ancestry or Find A Grave without WRITTEN permission from the poster ~ copyright restrictions apply.
*Transcribed for genealogy purposes; I have no relation to the person(s) mentioned.

Note: Maynard and Myrtle are buried in Evergreen Cemetery, Fairfield, in Lot 3rd.220. Their son Stephen is also in this lot with his inscription on the opposite side of their gravestone. 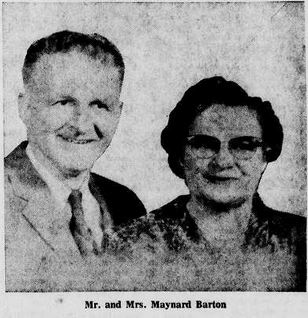