Dennis Dane SCHLARBAUM, 50 died May 16, 2011, in Sierra Vista, Arizona, concluding his hard-fought battle with colorectal and liver cancer. Dennis spent his early years in Estes Park, Colorado and was a 1979 graduate of Estes Park High School. He graduated from the University of Colorado, Boulder in 1988. Dennis resided in Loveland, Colorado until 2009, when he was diagnosed with cancer at Tucson, VA Medical Facility.

SCHLARBAUM served with the U.S. Navy in the Persian Gulf during the Iranian Hostage Crisis and aboard the USS New Jersy (BB-62) off the coast of Beirut, Lebanon in 1983-1984. He later earned his spurs as a U.S. Army officer with Second Armored Cavalry Regiment along the East-West German border. He separated from military service shortly after the collapse of the Iron Curtain in 1989.

Over the course of his life, he won awards as an athlete, poet, journalist, and photojournalist. He was recognized by both the Colorado and Louisiana Press Associations during a brief career as a print journalist. In his later years, he worked as an automatic fire sprinkler fitter in Arizona, Colorado and Massachusetts. He changed careers again after 2000 and began work as a low-voltage technician. He installed satellite TV distribution in hospitals and nursing homes, nurse-call systems, voice/data and other low-voltage systems throughout Colorado, South Dakota, New Mexico, Louisiana and Mississippi.

Although he took up many careers and took pride in his work, Dennis would rather be remembered for the love of his family, the service to his country, and his unceasing faith in God. Dennis lived as a simple man in what he considered to be a troubled and complex world. Where he could, he tried to understand and make a difference in the lives of others.

There will be a Memorial service on Friday, June 10, 2011 at 10:30 a.m. at Allnutt Funeral Service in Loveland, Colorado. Following the service his cremains will be interred at Loveland Burial Park, Loveland, Colorado. Call Doug SCHLARBAUM at (970) 232-4144 for more details. Memorial contributions may be made to a hospice of your choice in care of Allnutt Funeral Service. 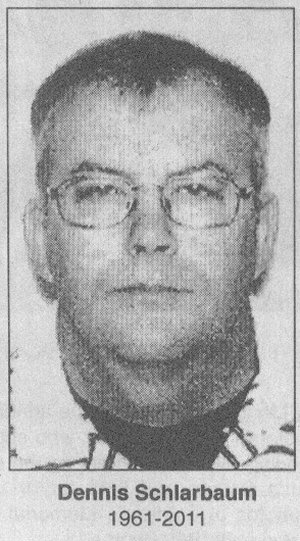