Arrangements are pending at Pedrick Funeral Home in Keosauqua.

A funeral will be at 11 a.m. Thursday at Pedrick Funeral Home in Keosauqua, with the Rev. Bill Shewmaker officiating. Burial will be in Fellows Cemetery in Keosauqua.

Open visitation will begin at 9 a.m. Thursday at the funeral home, with the family present from 10-11 a.m.

Memorials to Keosauqua Christian Church or Fellows Cemetery may be left at the funeral home or may be mailed to the family at P.O. Box 207, Keosauqua 52565.

Mrs. GIBERSON and her husband farmed in the Stockport area for many years before retiring to Keosauqua. She also worked in the Van Buren County Hospital's laundry department for 25 years.

Mrs. GIBERSON was a member of Keosauqua Christian Church.

Survivors include one daughter, Diane BYERS and husband Joseph of Naples, Fla.; one son, Lance GIBERSON and wife Gloria of Keosauqua and Mission, Texas; six grandchildren; nine great-grandchildren; and one brother, Jack KIRK of Elk, Wash.

In addition to her husband, she was preceded in death by her parents, four brothers and four sisters. 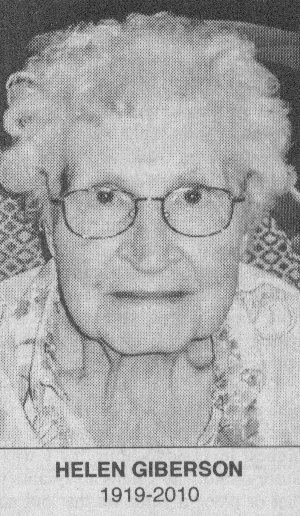