A funeral will be at 2 p.m. Tuesday at Pedrick Funeral Home in Keosauqua, with the Rev. Douglas Harding officiating. Burial will be in Pittsburg Cemetery, west of Keosauqua.

Open visitation will begin at 9 a.m. Tuesday at the funeral home, where the family will be present from 1-2 p.m.

Memorials to Pittsburg Cemetery may be left at the funeral home or may be mailed to the family at 2181 Key Blvd., Fairfield 52556.

Ms. KERR was born April 20, 1923, near Keosauqua, the daughter of Glen and Frances Pearl HOOTMAN KERR.

Ms. KERR graduated from Keosauqua High School and was employed for many years as an office manager for the United States Navy in San Francisco, Calif. She retired to Keosauqua in 1991.

Survivors include one brother, G. Dale KERR of Fairfield.

She was preceded in death by her parents and one brother, Kenneth KERR. 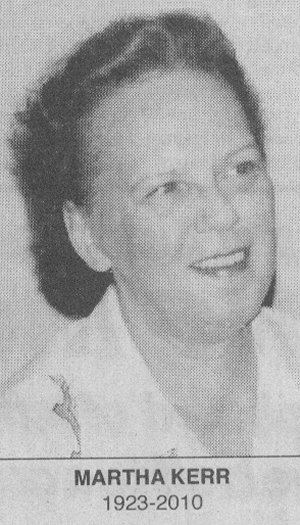